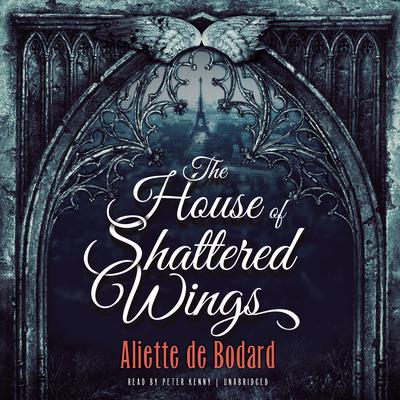 The House of Shattered Wings

The Dominion of the Fallen Series: Book 1

Finalist for the 2015 Locus Award for Best Fantasy Novel

An Amazon Best Book of the Month for Science Fiction & Fantasy

Multi-award-winning author Aliette de Bodard brings her story of the War in Heaven to Paris, igniting the City of Light in a fantasy of divine power and deep conspiracy.

In the late twentieth century, the streets of Paris are lined with haunted ruins. The Great Magicians’ War left a trail of devastation in its wake. The grands magasins have been reduced to piles of debris, Notre-Dame is a burnt-out shell, and the Seine has turned black with ashes and rubble and the remnants of the spells that tore the city apart. But those that survived still retain their irrepressible appetite for novelty and distraction, and the great houses still vie for dominion over France’s once-grand capital.

Once the most powerful and formidable, House Silverspires now lies in disarray. Its magic is ailing; its founder, Morningstar, has been missing for decades; and now something from the shadows stalks its people inside their very own walls.

Within the house, three very different people must come together: a naïve but powerful fallen angel, an alchemist with a self-destructive addiction, and a resentful young man wielding spells of unknown origin. They may be Silverspires’ salvation—or the architects of its last, irreversible fall. And if Silverspires falls, so may the city itself.

“Pathos and beauty intertwine in a novel filled with longing.” —Mary Robinette Kowal, multiple Hugo Award–winning author
“The devastated Paris of Aliette de Bodard’s novel is especially haunting…[a] compelling murder mystery, which plays out according to the supernatural terms de Bodard has laid out so evocatively.” —Chicago Tribune
“By finding so much ugliness even in supernatural beauty, de Bodard makes both seem more compelling and more concrete.” —NPR.org
“A fantastical spy thriller that reads like a hybrid of le Carré and Milton, all tinged with the melancholy of golden ages lost.” —Publishers Weekly (starred review)
“De Bodard has spun a fascinating Paris of decay and cruelty. Phillippe is a marvel of a character.” —Library Journal (starred review)
“Intelligent fantasy reading for those interested in magic, secrets, and critical examinations of faith.” —Booklist
“Narrator Peter Kenny’s voices are reflective of the strong personalities who are pitted against evil in this fantasy…In addition to the principals, Kenny has a large cast of secondary characters to work with…[and] Kenny creates an atmosphere of restrained excitement toward the impending confrontation.” —AudioFile
“Fantastic! De Bodard’s tale of a post-everything Paris, struggling toward an uncertain future beneath the burden of its imperial sins, burns with vengeful magic and subtle, shining prose.” —Max Gladstone, author of the Craft Sequence series
“Lyrical, sophisticated, lush, suspenseful…brings to life an exciting world of deep magic and complex, layered characters.” —Ken Liu, author of The Grace of Kings
“An intense, beautiful, brutal journey written with an eye for the stunning, vivid detail and the cruel demands of duty, loyalty, and leadership. Its portrait of a ruined Paris ruled by fallen angels is one I won’t soon forget.” —Kate Elliott, author of Court of Fives
”Wraps you completely in its world and its characters…convincing, gripping, and filled with wonders.” —Kari Sperring, author of The Grass King’s Concubine
“A fascinating and elegant mystery…A subtle, hugely enjoyable, mix of fallen angels and human frailty.” —Tom Lloyd, author of The Twilight Reign
“Thoughtful, complex, and engrossing, a fantastical thriller set in a Paris that is both instantly recognizable and yet utterly alien.” —Laura Anne Gilman, Nebula Award-nominated author of Silver on the Road
“Aliette de Bodard takes the reality we know and shatters it, creating an original and fascinating world full of shadows, magic, and intrigue.” —Freda Warrington, author of The Dark Arts of Blood