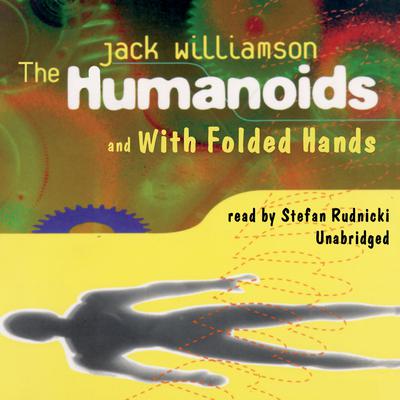 The Humanoids and With Folded Hands

On the far planet Wing IV, a brilliant scientist creates the humanoids, sleek black androids programmed to serve humanity. But are they perfect servants or perfect masters? Gradually the humanoids spread throughout the galaxy, threatening to stifle all human endeavor. Only a hidden group of rebels can stem the humanoid tide, if it’s not already too late.

First published in Astounding Science Fiction during the magazine’s heyday, The Humanoids, science fiction grand master Jack Williamson’s finest novel, has endured for fifty years as a classic on the theme of natural versus artificial life. With Folded Hands continues the story.

“Even though life does hurt, would we want robots around dedicated to preventing that pain? The author explores this question in one of the earliest and most popular robot novels in the genre. Stefan Rudnicki narrates, his pleasant bass voice providing good tone for the story, which is filled with mechanical men, atomic weapons, brilliant scientists, and rebels.” —AudioFile
“Features a deep, human-uniting struggle against humanoids who are eerily human and characters who are warts-and-all real people with whom readers empathize…Stefan Rudnicki’s rumbly voice lends humanity and depth to characters created in 1948.” —Library Journal

Jack Williamson (1908–2006) published his first short story in 1928 and produced entertaining, thought-provoking science fiction from then on. The second person named Grand Master by the Science Fiction Writers of America, he was always in the forefront of the field, being the first to write fiction about genetic engineering (he invented the term), antimatter, and other cutting-edge science. A Renaissance man, he was a master of fantasy and horror as well as science fiction.