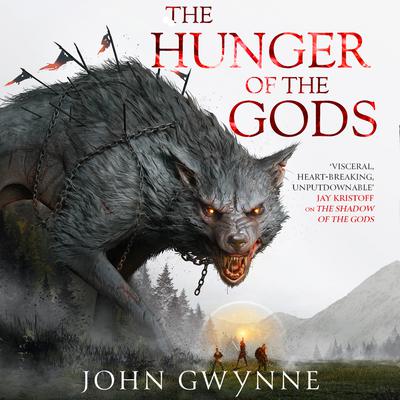 The Hunger of the Gods

Set in a Norse-inspired world and packed with myth, magic, and vengeance, this second book in John Gwynne’s Bloodsworn trilogy is the next chapter an epic saga that follows a band of warriors as they face the wrath of ancient gods and change the shape of the world.

Lik-Rifa, the dragon god of legend, has been freed from her eternal prison. Now she plots a new age of blood and conquest.

As Orka continues the hunt for her missing son, the Bloodsworn sweep south in a desperate race to save one of their own – and Varg takes the first steps on the path of vengeance.

Elvar has sworn to fulfil her blood oath and rescue a prisoner from the clutches of Lik-Rifa and her dragonborn followers, but first she must persuade the Battle-Grim to follow her.

Yet even the might of the Bloodsworn and Battle-Grim cannot stand alone against a dragon god.

Their hope lies within the mad writings of a chained god. A book of forbidden magic with the power to raise the wolf god Ulfrir from the dead . . .and bring about a battle that will shake the foundations of the earth.

Praise for The Shadow of the Gods
“There is not a dull chapter in this fantasy epic.” —Vulture (Best of the Year)

"A satisfying and riveting read. It’s everything I’ve come to expect from a John Gwynne book." —Robin Hobb

"A masterclass in storytelling . . . epic, gritty fantasy with an uncompromising amount of heart." —FanFiAddict


For more from John Gwynne, check out:

The Bloodsworn Trilogy
The Shadow of the Gods

The Faithful and the Fallen
Malice
Valor
Ruin
Wrath

John Gwynne is the author of The Faithful and the Fallen series and Of Blood and Bone trilogy. He studied and lectured at Brighton University.