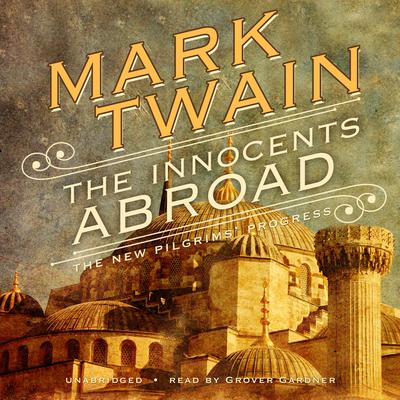 The Innocents Abroad: Or, The New Pilgrims’ Progress

In June 1867, Mark Twain set out for Europe and the Holy Land on the paddle steamer Quaker City. His enduring, no-nonsense guide for the first-time traveler also served as an antidote to the insufferably romantic travel books of the period.

“Who could read the programme for the excursion without longing to make one of the party?”

So Mark Twain acclaims his voyage from New York City to Europe and the Holy Land. His adventures produced The Innocents Abroad, a book so funny and provocative it made him an international star for the rest of his life. He was making his first responses to the Old World—to Paris, Milan, Florence, Venice, Pompeii, Constantinople, Sebastopol, Balaklava, Damascus, Jerusalem, Nazareth, and Bethlehem. For the first time he was seeing the great paintings and sculptures of the Old Masters. He responded with wonder and amazement but also with exasperation, irritation, and disbelief. Above all he displayed the great energy of his humor, more explosive for us now than for his beguiled contemporaries.

“A classic work…[that] marks a critical point in the development of our literature.” —Leslie A. Fiedler, literary critic
“The volume contains many shrewd things, and not a few that are funny...gives a much more truthful idea, we doubt not, of life and scenes abroad than many a more pretentious book.” —New York Independent
“This is the raciest book we have met with for many a day. Much as we had expected to be pleased, we must truthfully say that we had no idea so much humor, wit, geniality, fine description and good sense, could be contained within the covers of any one book...Our sides ache, and we lay aside the volume to rest, and to advise our friends and readers, one and all, to buy the book at the first opportunity, and read it through.” —National (N.J.) Standard
It is a rare and wonderful combination. The humor is natural, never forced; the narrative is instructive, and the descriptive passages are some of the finest in the English language, abounding in choice expressions and beautiful metaphor. —Newark (N.J.) Register
“A humorous travel narrative…The Innocents Abroad sharply satirized tourists who learn what they should see and feel by reading guidebooks. Assuming the role of a keen-eyed, shrewd Westerner, Twain was refreshingly honest and vivid in describing foreign scenes and his reactions to them. He alternated serious passages…with risible ones. The humor itself was varied, sometimes in the vein of the Southwestern yarn spinners, sometimes in that of contemporaneous humorists such as Artemus Ward and Josh Billings, who chiefly used burlesque and parody and other verbal devices.” —Merriam-Webster’s Encyclopedia of Literature