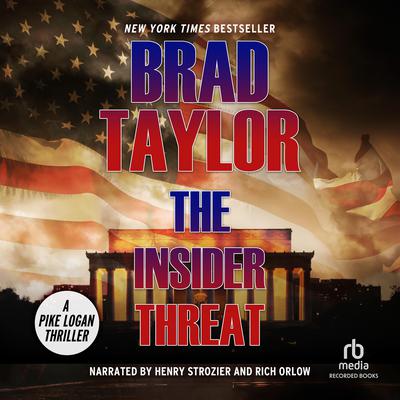 By Brad Taylor
Read by Henry Strozier and Rich Orlow

In the eighth action-packed thriller in the New York Times bestselling Pike Logan series, ISIS, the most maniacal terrorist organization the modern world has ever seen, is poised to make their most audacious strike yet. The United States has anticipated and averted countless attacks from terrorist groups-thanks in large part to the extralegal counterterrorist unit known as the Taskforce. But in The Insider Threat, a much more insidious evil is about to shatter the false sense of safety surrounding civilized nations. While world powers combat ISIS on the battlefield, a different threat is set in motion by the group-one that can't be defeated by an airstrike. Off the radar of every Western intelligence organization, able to penetrate America or any European state, they intend to commit an act of unimaginable barbarity. Only Pike Logan and the Taskforce stand in the way of an attack no one anticipates, a grand deception that will wreak unthinkable chaos and reverberate throughout the Western world.

“Taylor is one of the best in the Vince Flynn line of military thrillers featuring covert operations, and he has the eerie ability to predict real-world headlines. And, somehow, he just keeps getting better and better.” —Booklist (starred review)

Brad Taylor is the author of military thrillers in the Taskforce series and the Pike Logan series, including the New York Times bestseller No Fortunate Son. He is a retired lieutenant colonel and a twenty-one-year veteran of the US Army Infantry and Special Forces, including eight years with the 1st Special Forces Operational Detachment–Delta, popularly known as Delta Force. He retired in 2010 after serving more than two decades and participating in Operation Enduring Freedom and Operation Iraqi Freedom, as well as classified operations around the globe. His final military post was as assistant professor of military science at The Citadel, the Military College of South Carolina. When not writing, he serves as a security consultant on asymmetric threats for various agencies.