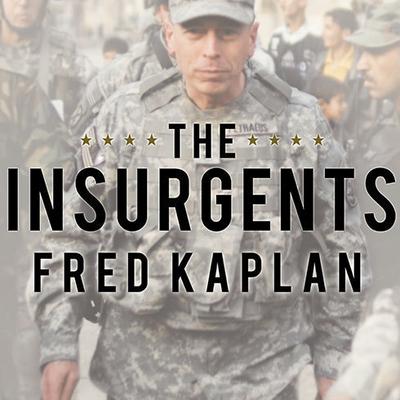 The Insurgents: David Petraeus and the Plot to Change the American Way of War

Finalist for the 2014 Pulitzer Prize for General Nonfiction

Based on previously unavailable documents and interviews with more than one hundred key players, including General David Petraeus, The Insurgents unfolds against the backdrop of two wars waged against insurgencies in Iraq and Afghanistan. But the main insurgency is the one led at home by a new generation of officers—including Petraeus, John Nagl, David Kilcullen, and H. R. McMaster—who were seized with an idea on how to fight these kinds of "small wars" and who adapted their enemies' techniques to overhaul their own army. Fred Kaplan explains where their idea came from and how the men and women who latched onto this idea created a community (some would refer to themselves as a "cabal") and maneuvered the idea through the highest echelons of power.

This is a cautionary tale about how creative ideas can harden into dogma, how smart strategists—"the best and the brightest" of today—can win bureaucratic battles but still lose the wars. The Insurgents made the U.S. military more adaptive to the conflicts of the post–Cold War era, but their self-confidence led us deeper into wars we shouldn't have fought and couldn't help but lose.

A fascinating and powerful work by America's wisest national-security reporter about an epic battle. . . . If you love your country, if you care about its soldiers, if you wonder about the wisdom of their commanders, [listen to] this book now. —Tim Weiner, author of Legacy of Ashes