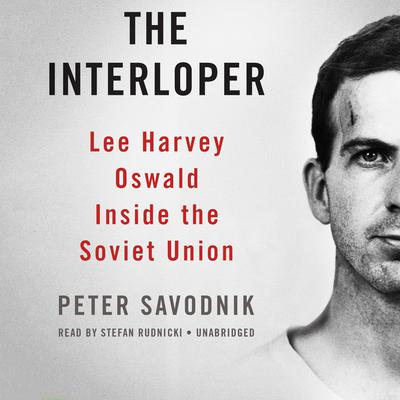 The Interloper: Lee Harvey Oswald inside the Soviet Union

Lee Harvey Oswald's assassination of President Kennedy in 1963 remains one of the most horrifying and hotly debated crimes in American history. Just as perplexing as the assassination is the assassin himself; the twenty-four-year-old Oswald's hazy background and motivations—and his subsequent murder at the hands of Jack Ruby—make him an intriguing yet frustratingly enigmatic figure. Because Oswald briefly defected to the Soviet Union, some historians allege he was a Soviet agent. But as Peter Savodnik shows in The Interloper, Oswald's time in the USSR reveals a stranger, more chilling story.

Oswald ventured to Russia at the age of nineteen, after a failed stint in the US Marine Corps and a childhood spent shuffling from address to address with his unstable, needy mother. Like many of his generation, Oswald struggled for a sense of belonging in postwar American society, which could be materialistic, atomized, and alienating. The Soviet Union, with its promise of collectivism and camaraderie, seemed to offer an alternative. While traveling in Europe, Oswald slipped across the Soviet border, soon settling in Minsk, where he worked at a radio and television factory. But Oswald quickly became just as disillusioned with his adopted country as he had been with the United States. He spoke very little Russian, had difficulty adapting to the culture of his new home, and found few trustworthy friends—indeed most, it became clear, were informing on him to the KGB. After nearly three years, Oswald returned to America feeling utterly defeated and more alone than ever, and as Savodnik shows, he began to look for an outlet for his frustration and rage.

Drawing on groundbreaking research, including interviews with Oswald's friends and acquaintances in Russia and the United States, The Interloper brilliantly evokes the shattered psyche not just of Oswald himself but also of the era he so tragically defined.

“An exemplary biography of Lee Harvey Oswald…A finely drawn picture…Mr. Savodnik knows how to bring to life the dull grey world of the Soviet provinces. With a knack for characterization, he turns his subject into a real person: unattractive, unfortunate, and often violent…Obsessives will doubtless quibble with Mr. Savodnik’s calm analysis. For others, the messy, contradictory, and ultimately tragic story he tells will ring true.” —Economist
“A deep probe into the sketchy backstory of the triggerman.”  —Vanity Fair
“[A] penetrating study of Oswald’s pivotal sojourn in the Soviet Union.” —New York Times Book Review
“The most original and interesting book to appear in this season of commemoration…Savodnik’s re-creation of Oswald’s time in Russia is brilliant.” —Dallas Morning News
“Most investigators of the assassination of President John F. Kennedy have worked to tie Lee Harvey Oswald to physical evidence or to suspicious relationships. In The Interloper, Peter Savodnik does something simpler: He explains Oswald’s motive.” —Washington Post
“A much-needed account of Lee Harvey Oswald…Savodnik’s book is good enough (and it is very good) to allow the reader sometimes to draw different conclusions from those of the writer.” —Times (London)
“The best new book on the assassination.” —Texas Monthly
“The accumulation of quotidian detail in The Interloper will startle even hard-core assassination buffs. The rendering of Oswald as a real man, a fathomable character with grandiose thoughts and primal urges, favorite books and private hurts, a tragic childhood and a diffident personality, is Peter Savodnik’s great accomplishment.” —National Review
“Unlike previous accounts of the man who assassinated Kennedy, which focus on whether he acted alone, journalist Savodnik here delivers a genuine biography that emphasizes the nearly three years Oswald spent in the Soviet Union and attempts to address the oft-neglected question of why he wanted to kill the President…Paints an intriguing portrait of a restless, tormented soul who accomplished little in a short life until he turned himself into an infamous historical figure.” —Publishers Weekly
“Savodnik, a journalist who has reported from Russia, peels back the layers of conspiracy chatter surrounding Lee Harvey Oswald and investigates the man himself by focusing on his time in the Soviet Union…This work complements Gerald Posner’s Case Closed, which also sees Oswald as the lone—and loner—assassin, as well as Priscilla Johnson McMillan’s Marina and Lee, which takes a more personal and Marina-focused approach.” —Library Journal
“Savodnik begins with the assumption, for which he later offers plenty of evidence, that Oswald acted alone, and he devotes his time to exploring the reasons why this twenty-four-year-old assassinated an American president. His focus is on Oswald’s years in the Soviet Union…His real interest lies in presenting a picture of Lee Harvey Oswald the man, not merely the murderer. A very welcome addition to the voluminous literature about the Kennedy assassination.”  —Booklist
“Peter Savodnik, who once reported from Moscow, is no conspiracy theorist. He believes Oswald did it—and acted alone. The nagging question is, why? To find the answer, Savodnik traces Oswald’s time in the Soviet Union from 1959 to 1962. The Interloper gets its title from Oswald’s lifelong efforts to escape his old life and insert himself into a new one…Ever the interloper, his disconnectedness led to his actions on November 22, 1963. In a sense, says Savodnik, it was as much a suicide attempt as it was a murder.” —BookPage
“A journalist’s sure-footed probing into Lee Harvey Oswald’s three years in Russia finds an unsettling time of retrenchment and rage…An oddly intimate foray into the life of this most banal specimen of evil.” —Kirkus Reviews
“What an astonishing addition to the literature on the Kennedy killing. Oswald’s childhood is well known; his activities in the days leading up to the shooting are, as well. But Savodnik has filled in a hole in the narrative by tracing what Oswald got up to in the USSR—and what effect his time there had on him. The Interloper adds an indispensable chapter to this awful story.” —Robert Service, professor of Russian history, Oxford University
“If you have any doubt that Lee Harvey Oswald acted alone in shooting President Kennedy, you should read Peter Savodnik’s The Interloper to set you straight. If you are convinced—as you should be—that Oswald was the sole assassin but don’t understand why he did it, you will find a convincing answer in this insightful book.” —Jack F. Matlock, Jr., author of Reagan and Gorbachev: How the Cold War Ended
“The Interloper is a meticulously researched account of the three years spent in the Soviet Union by Lee Oswald, a semiliterate failure who could find a home neither in his native America nor in the USSR. It explains a great deal about the psyche of the man who robbed us of John F. Kennedy.” —Richard Pipes, professor of history, emeritus, Harvard University

Peter Savodnik has written for Time, Wired, Slate, GQ, Harper’s, W, Condé Nast Traveler, the Los Angeles Times Magazine, the Washington Post, and many other publications. Formerly based in Moscow, he has traveled extensively in the former Soviet Union and reported on politics, crime, culture, travel, and fashion from that part of the world. He holds an MA in philosophy from the University of Chicago.