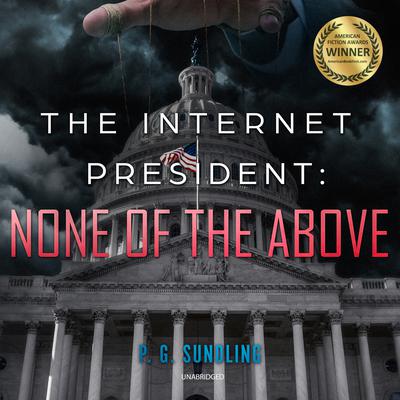 The Internet President: None of the Above

This award-winning novel blends action, comedy, drama, romance, and politics in an unconventional story that will keep you guessing.

James Wong built a billion-dollar software company with his childhood friend, Maria Cortez. He had everything until an ultra-rich investor stole control of his company with a shady contract. How do you fight the rich and powerful? In a video game, he would use a power-up to defeat the villain. Maria tells him there aren’t power-ups in real life, but James finds the ultimate power-up: become president.

They must uncover secrets about their company, themselves, and the dark forces aligned against them. As the world falls apart around them, it will take every ounce of Maria’s strength and every crazy idea James can muster to get their company back.

P. G. Sundling, a novelist and software coder in Los Angeles, is a life-long storyteller who shifted from screenplays to novels and also worked in technology for more than twenty years, including at UCLA and Fortune 500 entertainment companies, and was part of a team that won PC Magazine’s Editor’s Choice Award for Best Virtual Desktop.