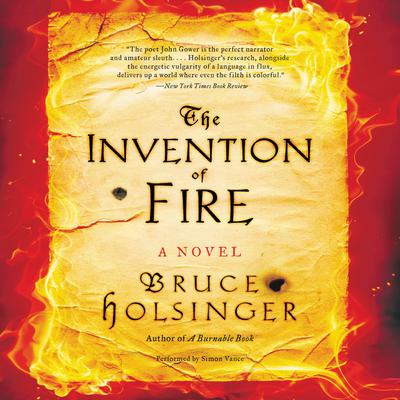 The Invention of Fire: A Novel

The author of the acclaimed medieval mystery A Burnable Book once again brings fourteenth-century London alive in all its color and detail in this riveting thriller featuring medieval poet and fixer John Gower—a twisty tale rife with intrigue, danger mystery, and murder.

Though he is one of England’s most acclaimed intellectuals, John Gower is no stranger to London’s wretched slums and dark corners, and he knows how to trade on the secrets of the kingdom’s most powerful men. When the bodies of sixteen unknown men are found in a privy, the Sheriff of London seeks Gower’s help. The men’s wounds—ragged holes created by an unknown object—are unlike anything the sheriff’s men have ever seen. Tossed into the sewer, the bodies were meant to be found. Gower believes the men may have been used in an experiment—a test for a fearsome new war weapon his informants call the “handgonne,” claiming it will be the “future of death” if its design can be perfected.

Propelled by questions of his own, Gower turns to courtier and civil servant Geoffrey Chaucer, who is working on some poems about pilgrims that Gower finds rather vulgar. Chaucer thinks he just may know who commissioned this new weapon, an extremely valuable piece of information that some will pay a high price for—and others will kill to conceal. . .

“Perhaps the unlikeliest sleuthing duo in literary-thriller history, Geoffrey Chaucer and John Gower, return in Holsinger’s second medieval mystery…What they find has terrible implication for their era—and ours—in this fascinating, bawdy, and quite fun book.” —Cleveland Plain Dealer
“The invention of handguns presages a radical change in warfare in Holsinger’s skillful and engrossing second medieval whodunit…Holsinger is equally adept at depicting the machinations of the rich and powerful and the fears and hopes of the working class, ‘desperate to hold on to their small scraps of ground in the face of the great events unfolding around them.’” —Publishers Weekly (starred review)
“This excellent period mystery is narrated in a gloriously earthy language that is, long before Shakespeare and the King James Bible, still in the process of taking shape. Fans of the previous book as well as aficionados of the historical genre won’t be able to put this novel down.” —Library Journal (starred review)
“In this absorbing follow-up…Gower’s self-deprecating wit and Holsinger’s skillful conjuring of detailed mental images will appeal to fans of C. J. Sansom and Ariana Franklin.” —Booklist
“One of the chief delights here is the language, which convincingly mimics Chaucerian speech…[and] vivid scenes of daily life circa 1386: the endless bribery required to get anything done, the struggles of women high and low, even Gower’s losing battle with what appears to be encroaching macular degeneration. A cautionary tale that argues powerfully against ‘handgonnes’ and their modern descendants.” —Kirkus Reviews
“Switching between upper- and lower-class British and French accents, Vance follows Gower, who is helped by Geoffrey Chaucer, as he ferrets out the truth about the guns. Vivid descriptions of London, poverty, punishments, and guild work are interspersed with the murder investigation.” —AudioFile

Bruce Holsinger is a prolific and award-winning scholar of the medieval period who teaches at the University of Virginia. His books on medieval culture have won prizes from the Modern Language Association, the Medieval Academy of America, and other scholarly organizations. He is a Guggenheim Fellow and a recipient of research fellowships from the American Council of Learned Societies and the National Endowment for the Humanities.