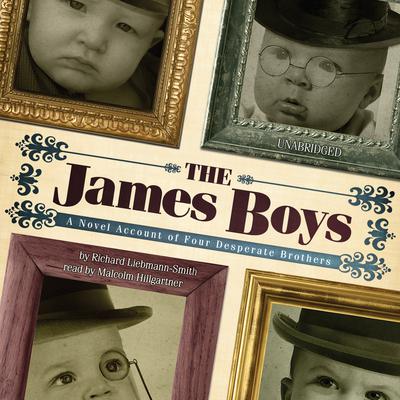 The James Boys: A Novel Account of Four Desperate Brothers

Someone once said that the entire story of America in the nineteenth century is encompassed in the saga of the James brothers: psychologist William and novelist Henry James in the east, and outlaws Frank and Jesse James in the west. This inspired humorist Richard Liebmann-Smith to wonder: what if William and Henry’s actual troubled younger brothers became Frank and Jesse James?

On a train in 1876, Henry James is returning home from his journalistic tour under a cloud of psychosomatic symptoms. Across the aisle sits the beguiling Elena Hite, the daughter of a railroad baron, who will soon know all of the James boys’ secrets. But their conversation comes to a halt when the train is stopped and boarded by the notorious James Gang, led by Frank and Jesse, who stride into the coach with guns ablaze.

“A rollicking saga.” —Los Angeles Times
“Takes ‘what’s in a name?’ to amusing extremes…The jokes and historical squiblets go off like six-guns.” —Publishers Weekly
“Delightful…Students of both high and low culture will revel in the picaresque but altogether literary adventures in this well-imagined historical fiction.” —Booklist
“A through-the-looking-glass romp that boldly blends both sides of the American character—the brilliant and the barbaric—in one unforgettable family and one seriously entertaining story.” —BookLetters, New York Public Library

Richard Liebmann-Smith, a former editor of The Sciences magazine, is co-creator an animated Comedy Central TV show. He has written for the New Yorker and National Lampoon, among others. He lives in New York City.