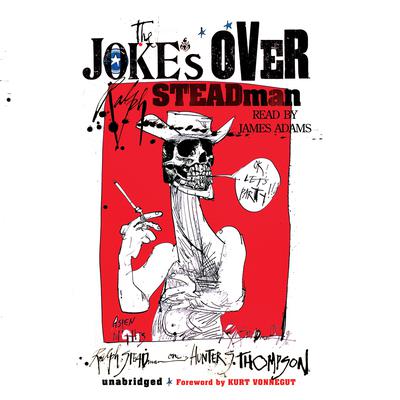 The Joke’s Over: Bruised Memories: Gonzo, Hunter S. Thompson, and Me

In early 1970, artist Ralph Steadman went to America in search of work and found more than he bargained for. At the Kentucky Derby he met a former Hell’s Angel, one Hunter S. Thompson. Thompson wrote later that “The rest of that day blurs into madness. The rest of that night, too. Steadman was lucky to get out of Louisville without serious injuries, and I was lucky to get out at all.” Thus began a thirty-year working relationship and friendship that gave birth to what became known as Gonzo Journalism.

Few people knew Hunter S. Thompson as well as Ralph Steadman did. This no-holds-barred memoir tells of their unique collaboration that documented the turbulent years of the civil-rights movement, the Nixon years, and Watergate. When Thompson committed suicide in 2005, it was the end of a friendship that was defined by both betrayal and understanding.

“It is fairly amazing that these two could get away with having so much fun, on expense accounts no less, in the name of journalism.” —New York Post
“Records…the wildly erratic tempo of their bruising friendship…A fair and poignant assessment of the chaotic genius and messy legacy of Hunter S. Thompson.” —Independent (London)
“There can be no question that Hunter S. Thompson’s pivotal works would not be the same without the accompanying artwork of his partner Ralph Steadman…[Steadman] recalls it all eloquently.” —Buffalo News
“Bizarre and compelling.” —Miami New Times
“A pleasant surprise.” —Tampa Tribune
“Steadman genuinely admires his friend’s writing but examines his character with clear-eyed honesty and corrects the record as he sees fit…Funny and—unlike his subject—dry.” —Booklist
“A must read.” —BookPage

Ralph Steadman has illustrated many books, including Hunter S. Thompson’s legendary Fear and Loathing in Las Vegas and the fiftieth-anniversary edition of George Orwell’s Animal Farm. He is the author of four other books. He lives in England.