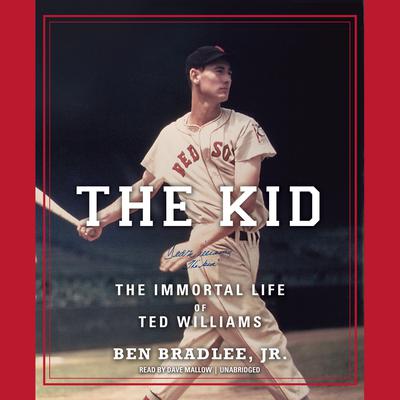 The Kid: The Immortal Life of Ted Williams

At long last, the epic biography Ted Williams deserves—and that his fans have been waiting for.

Williams was the best hitter in baseball history. His batting average of .406 in 1941 has not been topped since, and no player who has hit more than five hundred home runs has a higher career batting average. Those totals would have been even higher if Williams had not left baseball for nearly five years in the prime of his career to serve as a Marine pilot in World War II and Korea. He hit home runs farther than any player before him—and traveled a long way himself, as Ben Bradlee, Jr.'s, grand biography reveals. Born in 1918 in San Diego, Ted would spend most of his life disguising his Mexican heritage. During his twenty-two years with the Boston Red Sox, Williams electrified crowds across America—and shocked them, too. His notorious clashes with the press and fans threatened his reputation. Yet while he was a god in the batter's box, he was profoundly human once he stepped away from the plate. His ferocity came to define his troubled domestic life. While baseball might have been straightforward for Ted Williams, life was not.

The Kid is biography of the highest literary order, a thrilling and honest account of a legend in all his glory and human complexity. In his final at-bat, Williams hit a home run. Bradlee's marvelous book clears the fences, too.

“Any time an author sets out to write a definitive biography, expect many layers to be peeled back from the subject’s life. Ben Bradlee Jr. does that admirably in this exhaustive book about one of baseball’s greatest hitters. Narrator Dave Mallow keeps a steady pace while maintaining a consistent tone for the listener…He brings to life the angry quotes and commentary that capture the ballplayer’s bitterness toward many people, especially sportswriters. In the end, the listener is left with a well-told story about an imperfect man.” —AudioFile

Ben Bradlee, Jr., spent twenty-five years at the Boston Globe as a reporter and editor, overseeing as deputy managing editor, among many critically acclaimed stories, the Globe’s Pulitzer Prize–winning coverage of the sexual abuse scandal in the Catholic Church. He lives in Cambridge, Massachusetts.