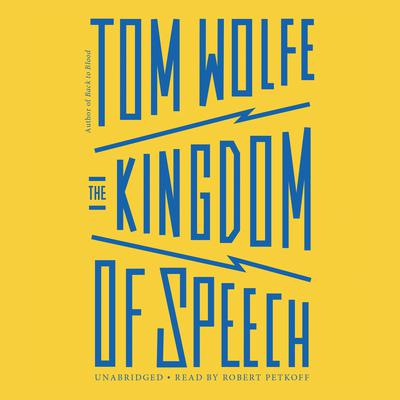 The Kingdom of Speech

First there was the word. Or was there?

Before Tom Wolfe was a bestselling novelist, he was a groundbreaking journalist. Now the maestro storyteller turns his attention to the mystery behind the creation of hiw own most important tool.

In The Kingdom of Speech, Wolfe makes the captivating, paradigm-shifting argument that speech—not evolution—is responsible for humanity’s complex societies and achievements. From Alfred Russel Wallace, the self-taught Englishman who beat Charles Darwin to the theory of natural selection but later renounced it for its inability to explain human speech, to the neo-Darwinists, who for years argued that there is a language “organ” in the human brain, Wolfe explains how science has repeatedly tried and failed to account for man’s gift of gab.

Flash forward to the present day and the controversial work of another outsider, anthropologist Daniel Everett. After thirty years of studying a tribe isolated deep in the jungles of the Amazon, Everett revealed a people whose prehistoric level of speech had led to a society without religion, ceremonies, hierarchies, marriage, or ornaments, and without the ability to plan ahead or to consider a past beyond personal lifetimes, thus defying the current wisdom that language is hardwired in humans.

With trenchant wit and uproarious humor, Wolfe cracks open the secretive, solemn, long-faced, laugh-out-loud zigzags of Darwinism, both old and neo-, and he shows the endless importance of the courageous outsider in overturning our most cherished ideas about ourselves. Provocative and fast-paced, this is a tour de force from Wolfe.

“Narrator Robert Petkoff’s bright and energetic delivery reflects the author’s well-known penetrating intelligence and curiosity, here matched with a dose of exasperation as he traces the history of disproven theories on language development and acquisition…Petkoff switches from a tone of satire to wonder at what a singular species we humans are—while having little idea how we got that way.” —AudioFile
“Tom Wolfe aims his unparalleled wit at evolution, arguing that complex language is the singular superpower that allows humans to rule the planet.” —Harper’s Bazaar
"[Wolfe] brings to this academic debate the same irreverence and entertaining quality that lit up Electric Kool-Aid Acid Test…The same manic prose, the hip rhythms, and cleverly crafted arguments of the genius Tom Wolfe.” —USA Today
“The author’s own prose is, as ever, a marvelous mix of gleeful energy and whip-around-the-neck control, and his book is a gas to read.” —Wall Street Journal
“A provocation rather than a dissertation. The sound it makes is that of a lively mind having a very good time and enjoying the scent of its own cold-brewed napalm in the morning.” —New York Times
“This being Tom Wolfe, the ponderous debate over language and evolution takes on a kind of pop-art pizzazz.” —Boston Globe
“Barely a dull sentence.” —Vox
“Clever, funny, serious, satirical, and instructive.” —Publishers Weekly
“[Wolfe] transforms our perception of speech.” —Booklist
“Wolfe throws a Molotov cocktail at conventional wisdom in a book that won’t settle any argument but is sure to start some.” —Kirkus Reviews