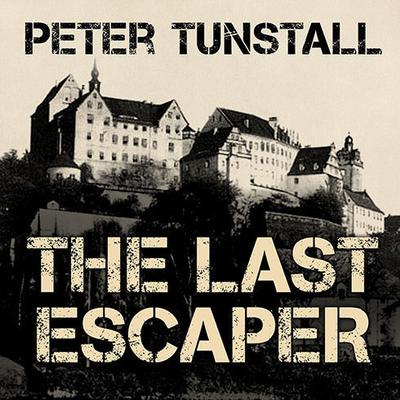 The product of a lifetime's reflection, The Last Escaper is Peter Tunstall's unforgettable memoir of his days in the British Royal Air Force and as one of the most celebrated British POWs of World War II. Tunstall was an infamous tormentor of his German captors. Dubbed the "cooler king" on account of his long spells in solitary, he once dropped a water "bomb" directly in the lap of a high-ranking German officer. He also devised an ingenious method for smuggling coded messages back to London. But above all, he was a highly skilled pilot, loyal friend, and trusted colleague.
Without false pride or bitterness, Tunstall recounts the hijinks of training to be a pilot, terrifying bombing raids, and elaborate escape attempts at once hilarious and deadly serious—all part of a poignant and human war story superbly told by a natural raconteur. The Last Escaper is a captivating final testament by the "last man standing" from the Greatest Generation.

[T]he historical account of behind-the-scenes drama makes this a valuable addition to the period literature. —Publishers Weekly
“The story is not sugar coated to make things lighter than they were. The stark reality of war is ever present in his detailed accounting of life as a prisoner of war. We are taken through the highs and lows of not only each failed attempt but the psychological effects of imprisonment on himself, others in the camps, and ultimately how it changed each person involved.” —Pittsburgh Post-Gazette
“The historical account of behind-the-scenes drama makes this a valuable addition to the period literature.” —Publishers Weekly
“A remarkable memoir of a British lad’s salad days flying bombers against the Nazis and then repeatedly escaping their prison camps…An engrossing valediction to the tough, imaginative generation forged by the war.” —Kirkus Reviews
“Author Peter Tunstall tells listeners early on that his account of being a POW in Germany during WWII isn’t an adventure story. Still, John Lee’s hearty narration sometimes makes it sound like one as he keeps the British airman’s bravery and enthusiasm on listeners’ minds, especially in the early chapters about young Tunstall’s love of flying. Even the stories about escape attempts are laced with Tunstall’s wry humor and warm feelings toward his fellow prisoners. However, listeners will hear more than good yarns. The failed escape attempts carry a sense of frustration and risk. POWs’ daily problems, hunger most particularly, also are made clear, showing the constant undercurrent of war’s human toll.” —AudioFile

Peter Tunstall (1918–2013) joined the RAF in 1937 and after pilot training joined No. 61 Squadron at Hemswell, Lincolnshire, flying the twin-engined Hampden bomber. During the retreat to Dunkirk and the days that followed, he attacked targets in northern France. He was captured by the Germans in 1940 and held prisoner until 1945. After the war, Tunstall remained in the RAF as a flying instructor. He retired in 1958 and joined Laker Airways before moving to South Africa, where he continued to fly and secured a number of parts as a professional actor.