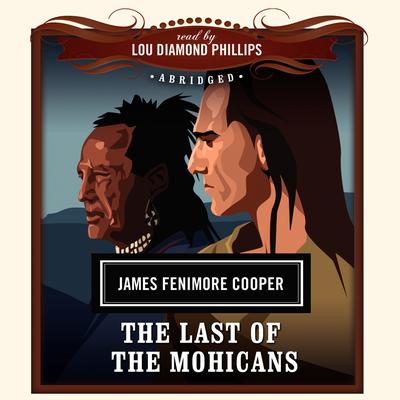 The Last of the Mohicans

The Classics Read by Celebrities Series

In James Fenimore Cooper’s classic frontier adventure story, a disillusioned man of great moral courage severs all ties with a society whose values he cannot accept and retreats to the vast unspoiled forests of upper New York State to live as a simple woodsman.

But the bloody French and Indian wars intrude, and Hawkeye and his loyal Mohican friends Chingachgook and Uncas are forced to come to the rescue when two beautiful sisters are taken hostage by renegade savages. Determined to save them, Hawkeye sets out on a chase that leads to ambushes, slaughter and bloodshed, ending in a climactic confrontation between two war parties.

The most popular of Cooper’s Leatherstocking Tales, The Last of the Mohicans is an unforgettable portrait of life on the frontier and the end of Indian civilization.

“[Cooper's] sympathy is large, and his humor is as genuine—and as perfectly unaffected—as his art.”  —Joseph Conrad
“This novel remains the most popular of Cooper’s Leatherstocking Tales, a classic story of the French and Indian War. The battles and exciting pursuits, which constitute the book’s plot, are rounded out by interesting Indian lore and descriptions of the wilderness.”  —Masterpieces of World Literature
“[Cooper’s] worldwide fame attests his power of invention, for his novels have been popular principally for their variety of dramatic incidents…but…[there has been] a revival of interest in their creation of tension between different kinds of society…between civil law and natural rights as these suggest issues of moral and mythic import.”  —The Concise Oxford Companion to American Literature
“The portrait of the unspoiled wilderness is timeless.”  —AudioFile

James Fenimore Cooper (1789–1851), the first major American novelist, was the son of a wealthy landowner who founded Cooperstown, New York. He attended Yale and served in the navy before turning to writing, winning international fame with The Spy (1821). After The Pioneers (1823), public fascination with the character of Natty Bumppo led him to write a series of sequels that gradually unfold the entire life of the frontier scout.