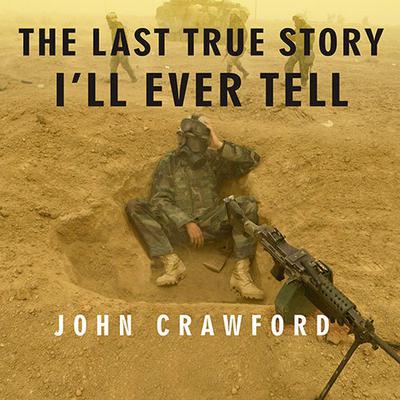 The Last True Story I'll Ever Tell: An Accidental Soldier's Account of the War in Iraq

The only book about the war in Iraq by a soldier on the ground-destined to become a classic of war literature. John Crawford joined the Florida National Guard to pay for his college tuition-it had seemed a small sacrifice to give up one weekend a month and two weeks a year in exchange for a free education. But one semester short of graduating, and newly married, he was called to active duty-to serve in Kuwait, then on the front lines of the invasion of Iraq, and ultimately in Baghdad. While serving in Iraq, Crawford began writing short nonfiction stories, his account of what he and his fellow soldiers experienced in the war. At the urging of a journalist embedded with his unit, he began sending his pieces out of the country via an anonymous Internet e-mail account. In a voice at once raw and immediate, Crawford's work vividly chronicles the daily life of a young soldier in Iraq-the excitement, the horror, the anger, the tedium, the fear, the camaraderie. All together, the stories slowly uncover something more: the transformation of a group of young college students-innocents-into something entirely different. In the tradition of Tim O'Brien's The Things They Carried, this haunting and powerful, brutal but compellingly honest book promises to become the lasting, personal literary account of the United States' involvement in Iraq. "Lawlor is masterful. Every now and then, you get a narrator who's so good he becomes indistinguishable from the character he's portraying. That would be Lawlor. He manages to convey the grittiness of the country, the gruffness of the soldiers, and Crawford's simmering anger and resentment with seamless ease." —Sandy Bauers, Philadelphia Inquirer "A tremendous book...incredibly gripping and incredibly well-written"—Jon Stewart, The Daily Show

“A tremendous book…incredibly gripping and incredibly well-written” —Jon Stewart, The Daily Show
“Lawlor is masterful. Every now and then, you get a narrator who’s so good he becomes indistinguishable from the character he’s portraying. That would be Lawlor. He manages to convey the grittiness of the country, the gruffness of the soldiers, and Crawford’s simmering anger and resentment with seamless ease.” —Philadelphia Inquirer

SPC John Crawford is an American Iraq War veteran and writer originally from Palatka, Florida. In the early 2000s, Crawford, already an Army veteran, had enlisted in the Army National Guard to help pay for his college tuition. With two credits to go before college graduation, John Crawford was called to active duty, sent to Kuwait and soon after to the front lines in Iraq. His bestselling memoir The Last True Story I’ll Ever Tell, is about his tour in Iraq. Crawford has made appearances on National Public Radio and The Daily Show.