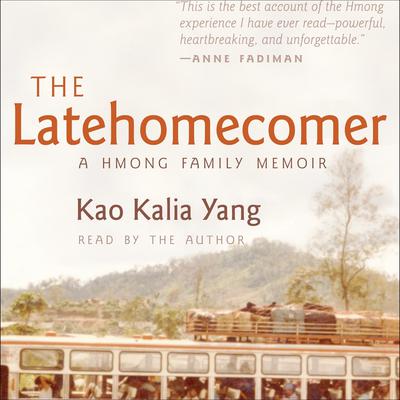 The Latehomecomer: A Hmong Family Memoir

In the 70s and 80s, thousands of Hmong families made the journey from the war-torn jungles of Laos to the overcrowded refugee camps of Thailand and onward to the United States—all in search of a new place to call home. Decades later, their experiences remain largely unknown. Kao Kalia Yang was driven to tell her own family’s story after her grandmother’s death. The Latehomecomer is a tribute to that grandmother, a remarkable woman whose spirit held her family together through their imprisonment in Laos, their narrow escape into Thailand’s Ban Vinai Refugee Camp, their immigration to St. Paul when Yang was only six years old, and their transition to life in America. It is also an eloquent, firsthand account of a people who have worked hard to make their voices heard in their adopted homeland.

Kao Kalia Yang is the author of The Latehomecomer: A Hmong Family Memoir, which was winner of the 2009 Minnesota Book Award and a finalist for the PEN/John Kenneth Galbraith Award and the Asian American Literary Award. Her work has been published in Longreads and the Virginia Quarterly. She has taught at Columbia University and Concordia University–St. Paul, among other places.