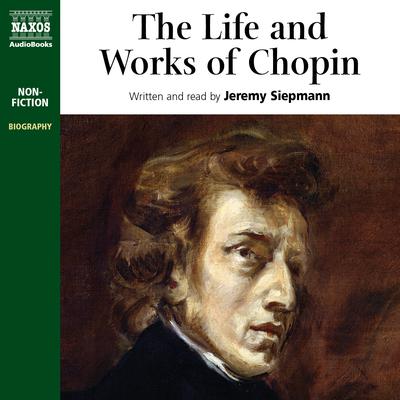 The Life and Works of Chopin

Fryderyk Chopin is the pianist-composer par excellence. Regarded as one of the most mesmeric performers of his day, he lives on in his music—his waltzes, mazurkas, études, preludes, nocturnes, three piano sonatas, two piano concertos, and much more. His life, from his birth in Poland, his famous affair with the French writer George Sand, and his death at the age of forty-nine in Paris, is told here with his music featuring prominently.

We think of Chopin as a sheltered genius, but this forthright portrait demonstrates he was far more boisterous than that. Cheerful as a youth, it was only later that the glare of publicity, the change from local to national celebrity, made Chopin guard his privacy more carefully—a change clearly presented in Jeremy Siepmann’s sympathetic account of the life of one of the key figures in Romantic music.

Jeremy Siepmann is an internationally acclaimed writer, musician, teacher, broadcaster, and editor. His series for Naxos—“Life and Works” and “Classics Explained”—have received exceptional accolades from critics and listeners on both sides of the Atlantic. His books include highly acclaimed biographies of composers, two volumes on the history and literature of the piano, and an introductory survey of chamber music. From December 1997 to February 2010 he was the editor of Piano magazine, whose regular contributors included many of the world’s greatest pianists.