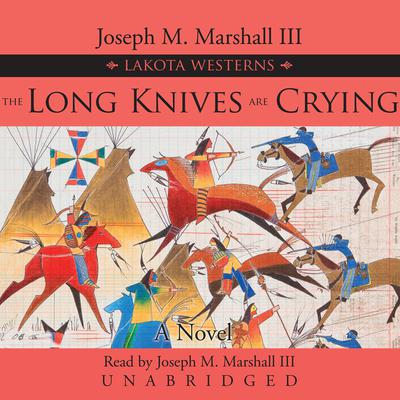 The Long Knives Are Crying

Finalist for the Spur Award for Best Western Short Novel

The second novel in Joseph M. Marshall III’s acclaimed Lakota Western series begins in 1875, as Sitting Bull gathers thousands of Lakota to face the growing problem of white incursion. What follows is a sweeping tale of the Battle of the Little Bighorn, including the days and weeks leading up to the conflict and the remarkable defeat of General George Armstrong Custer and the Seventh Cavalry.

Told for the first time from the Native perspective through the eyes of Lakota warrior Cloud, the story also weaves in the lesser-known but strategically important Battle of the Rosebud and the uncertain future that faced the Lakota following victory. Once again, Marshall infuses the story with his unique voice and eye for detail, creating a page-turning Western with a style of its own.

“[Marshall] brings the story of the Battle of Little Bighorn alive through the eyes and hearts of the American Indians.” —Denver Post
“I found myself brought into the Lakota world; Marshall does a superb job of showing how difficult things were becoming for the Lakota as their land was overtaken and the buffalo herds disappeared.” —Historical Novels Review