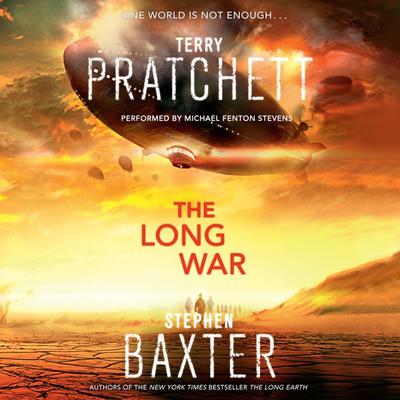 The Long War by Terry Pratchett and Stephen Baxter follows the adventures and travails of heroes Joshua Valiente and Lobsang in an exciting continuation of the extraordinary science fiction journey begun in their New York Times bestseller The Long Earth.   A generation after the events of The Long Earth, humankind has spread across the new worlds opened up by “stepping.” A new “America”—Valhalla—is emerging more than a million steps from Datum—our Earth. Thanks to a bountiful environment, the Valhallan society mirrors the core values and behaviors of colonial America. And Valhalla is growing restless under the controlling long arm of the Datum government.   Soon Joshua, now a married man, is summoned by Lobsang to deal with a building crisis that threatens to plunge the Long Earth into a war unlike any humankind has waged before.

Terry Pratchett (1948–2015) was an English novelist known for his frequently comical work in the fantasy genre. He is best known for his popular and long-running Discworld series. His first novel, The Carpet People, was published in 1971, and after publishing his first Discworld novel, The Color of Magic, in 1983, he wrote two books a year on average. He was the United Kingdom’s bestselling author of the 1990s and has sold more than 55 million books worldwide. In 2001 he won the Carnegie Medal for his children’s novel The Amazing Maurice and his Educated Rodents. Pratchett was appointed Officer of the Order of the British Empire for services to literature in 1998 and was knighted in 2009.

Stephen Baxter is an acclaimed, multiple award–winning author whose many books include the Xeelee Sequence series, the Time Odyssey trilogy (written with Arthur C. Clarke), and The Time Ships, a sequel to H. G. Wells’s classic The Time Machine. He lives in England.