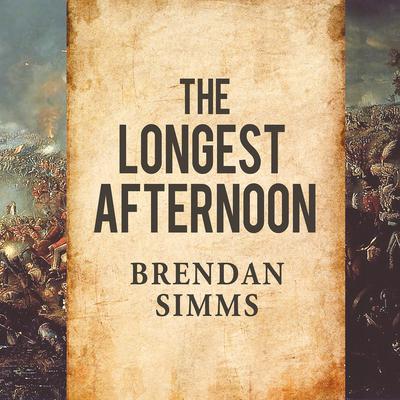 The Longest Afternoon: The 400 Men Who Decided the Battle of Waterloo

In 1815, the deposed emperor Napoleon returned to France and threatened the already devastated and exhausted continent with yet another war. Near the small Belgian municipality of Waterloo, two large, hastily mobilized armies faced each other to decide the future of Europe—Napoleon's forces on one side, and the Duke of Wellington on the other.
With so much at stake, neither commander could have predicted that the battle would be decided by the Second Light Battalion, King's German Legion, which was given the deceptively simple task of defending the Haye Sainte farmhouse, a crucial crossroads on the way to Brussels. In The Longest Afternoon, Brendan Simms recounts how these four-hundred-odd riflemen beat back wave after wave of French infantry until they were finally forced to withdraw, but only after holding up Napoleon for so long that he lost the overall contest. Their actions alone decided the most influential battle in European history.

Simms takes advantage of abundant letters and memoirs to deliver an engrossing, often gruesome nuts-and-bolts description of that afternoon. —Kirkus
“Simms’ fluent and meticulously researched narrative…provides enough context to engage not only specialists but also readers unfamiliar with the broader historical background.” —Wall Street Journal
“Simms tells the story of the combat for La Haye Sainte with the rich, gritty, eyewitness detail that it deserves…[and] offers a reminder that Waterloo was not fought just between the British and French but was very much a European battle.” —New York Times Book Review
“Superb…microhistory at its best.” —Washington Post
“Told in clear, concise, and colorful prose. The rich details and Simms’ ability to breathe life into primary source documents make this an exceptional war story.” —Roanoke Times
“Through his clever ability to entwine first-person accounting with historical narrative…the book reads as a minute-by-minute eyewitness accounting…The greatest attraction of this book is its ability to tell the story of the battle in a very realistic sense…The reader is drawn into the history and given insight to feel the accountings in a very real and pragmatic fashion.” —Military Review
“Simms recounts the fight from a fresh angle, delivering a thoroughly satisfying addition to a vast genre…Aided by a surprising number of letters, memoirs, and commentaries from participants, Simms writes a vivid account even readers familiar with Waterloo should not pass up.” —Military History
“There are times when a relatively small number of men can make a difference…This thoroughly engrossing account will thrill all history lovers.” —Library Journal (starred review)
“With typical British confidence and precision, Michael Page narrates this detailed tribute to the Second Light Battalion, King’s (the King of England) German Legion, which stood at the crossroads of Haye Sainte on June 18, 1815, defending a small farmhouse against wave after wave of Napoleon’s best soldiers long enough to tip the tide of battle to the side of the allies. Page delivers the many German surnames and phrases sprinkled throughout the text with exacting precision, which only seems right because without those 400 brave German riflemen it’s a distinct possibility that many English might have ended up speaking French (again).” —AudioFile

Brendan Simms is a professor of the history of international relations and a fellow at Peterhouse College, Cambridge. He is the author of Unfinest Hour, Three Victories and a Defeat, and Europe, which was shortlisted for the Lionel Gelber Prize.