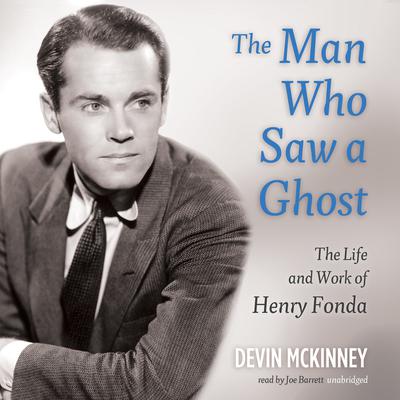 The Man Who Saw a Ghost: The Life and Work of Henry Fonda

A Kirkus Reviews “New and Notable Title” for Nonfiction, October 2012

The first major biography of the iconic actor Henry Fonda—a story of stardom, manhood, and the American character

Henry Fonda's performances—in The Grapes of Wrath, Young Mr. Lincoln, The Lady Eve, 12 Angry Men, On Golden Pond—helped define "American" in the twentieth century. He worked with movie masters from Ford and Sturges to Hitchcock and Leone. He was a Broadway legend. He fought in World War II and was loved the world over. Yet much of his life was rage and struggle. Why did Fonda marry five times—tempestuously to actress Margaret Sullavan, tragically to heiress Frances Brokaw, mother of Jane and Peter? Was he a man of integrity, worthy of the heroes he played, or the harsh father his children describe, the iceman who went onstage hours after his wife killed herself? Why did suicide shadow his life and art? What memories troubled him so?

McKinney's Fonda is dark, complex, fascinating, and a product of glamour and acclaim, early losses, and Midwestern demons—a man haunted by what he'd seen and who he was.

“How many different ways can I mean to call this book essential? The sentences, in honor of their subject, threaten to explode with implication and insight.” —Jonathan Lethem, New York Times bestselling and National Book Critics Circle Award–winning author
“Henry Fonda may have been the strangest, most compelling male movie star Hollywood ever spawned, and McKinney reveals him as even stranger and more compelling. In addition, this may be the single best piece of writing of any sort you’ll see this year.” —Luc Sante, award-winning author of Low Life
“McKinney makes it clear that Henry Fonda didn’t just see ghosts—he wanted to tackle them, both to exorcise his own demons and to possess them, while portraying characters representative of America: magnificent, but flawed. You might actually start to believe you’re getting to know a man who was, even to those closest to him, unknowable.”  —Robert Nott, author of He Ran All the Way: The Life of John Garfield and The Films of Randolph Scott
“The author of the best book in a generation about the Beatles, Devin McKinney here turns to one third of the cinema’ s trinity of American idealism (along with James Stewart and Gregory Peck), immediately grasping that like great characters in fiction from Ahab to Joe Christmas, great stars are distinguished by contradiction. No one was both as righteous and dark as Henry Fonda, and in no actor was the coexistence of the two as mysterious or did they so adamantly threaten to be the same. This book is incisive, eloquent and gorgeous, but what elevates McKinney is that the prose is matched by the thinking behind it, as singular as it is brilliant, and bracingly unimpressed by the decades of conventional wisdom that have preceded it.”  —Steve Erickson, author of Zeroville and These Dreams of You
“The story of a great American actor whose art was burnished by an anguished life…In rich, lyrical prose, McKinney deftly honors both the man and the mystery.”  —Kirkus Reviews (starred review)
“In this comprehensive study of Henry Fonda’s life and work, McKinney reveals a solitary man thrust into the public eye by riveting films…Those interested in the intimate lives of the stars will appreciate the attention to detail and richness of research. Highly recommended for readers looking to complete their old Hollywood education.” —Library Journal (starred review)

Devin McKinney, author of Magic Circles: The Beatles in Dream and History, has written for the Village Voice, Oxford American, Guardian, American Prospect, and Film Quarterly. He lives in central Pennsylvania.