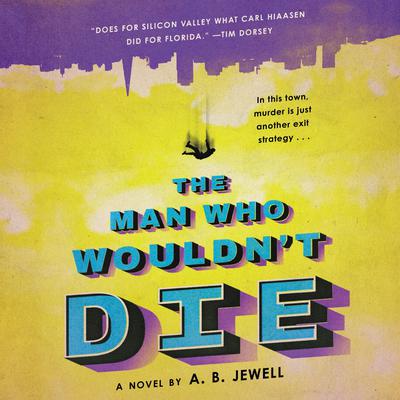 The Man Who Wouldn't Die: A Novel

By A. B. Jewell
Read by Kevin T. Collins

“DOES FOR SILICON VALLEY WHAT CARL HIAASEN DID FOR FLORIDA.” —Tim Dorsey

Silicon Valley scion Captain Don Donogue is dead under mysterious circumstances. In fact, he might’ve well have been murdered. Just ask Captain Don himself. He’s been sending messages about his suspicious death from beyond the grave. Yep, he’s been tweeting from the afterlife. Or so it seems.

Could life-after-death be Silicon Valley’s latest innovation? Our bodies die but our souls and social media accounts are eternal? This is the mystery that confronts the only sane person left in a region gone mad with greed, William Fitzgerald. Fitch. He’s a world-class detective, tough, stoic, carries a big fist and a flip phone. He’s a bad fit for Silicon Valley, where the law firms have drive-thru windows manned by barristeristas (who serve instant coffee and instant patents); attractive women aren’t MILF’s but TELFs (Tech Executives I’d Like To Fund); and couples are so anxious to get into the best free-play kindergartens that they get on the waiting list as soon as they freeze their sperm and eggs for later use.

One day, a woman knocks on Fitch’s door. She’s got a handful of cash and a wild story: She says that her father was Captain Don, or is Captain Don. He was killed, or maybe not. He’s tweeting from beyond. Fitch takes the case and goes into the belly of the valley, discovering that life and death, well, sometimes they’re just another transaction….

Original, clever, and hysterical, The Man Who Wouldn’t Die is the Carl Hiaasen of Silicon Valley and neo-noir at its unforgettable best.

“If Philip Marlowe was a stand-up comic, he might sound something like Fitch, the wisecracking, tech-savvy PI in this funny and twisted rejiggering of the classic detective novel.” —Mark Haskell Smith, author of Salty

Author Bio: A. B. Jewell