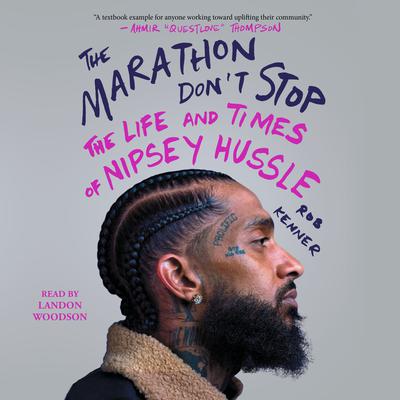 The Marathon Don't Stop: The Life and Times of Nipsey Hussle

The first in-depth biography of Nipsey Hussle, the hip hop mogul, artist, and activist whose transformative legacy inspired a generation with his motivational lyrics and visionary business savvy—before he was tragically shot down in the very neighborhood he was dedicated to building up.

In the ten years since he first met Nipsey Hussle in the offices of Vibe, journalist Rob Kenner followed Hussle’s career, paying close attention to the music and business movement he was building in Los Angeles. Ten years later, they spoke again. To Kenner, it became clear that Hussle had been underestimated his entire life—not just for his artistry but also for his intellect and intentions.

For Nipsey Hussle, “The Marathon” was more than a mixtape title or the name of a clothing store; it was a way of life, a metaphor for the relentless pursuit of excellence and the willpower required to overcome adversity day after day. Hussle was determined to win the race to success on his own terms, and he wanted to see his whole community in the winner’s circle with him.

Combining on-the-ground reporting and candid interviews with Hussle’s friends, family, and peers, The Marathon Don’t Stop traces the life and work of an extraordinary artist, placing him in historical context and unpacking his complex legacy. For the first time ever, members of his inner circle will speak about the man they knew and his determination to maintain integrity amidst the treacherous extremes of street life and the rap game.

The Marathon Don’t Stop is a journalistic account of Nipsey Hussle’s life and times, making sense of the forces that shaped a singular figure in hip hop culture.

“A beautiful tribute to a legendary artist.” —Quincy Jones, award-winning music, film, and television producer
“Kenner’s narrative is raw and unfiltered, the language of the streets of South L.A. unedited…Born into poverty, Hussle was a straight-A student who built his own computer from scratch but became a member of a local gang and the target of harassment by local police…Kenner provides a behind-the-scenes look at the rap business and a musical genius. Rousing and powerful.” —Library Journal
“A well-executed recognition of the dynamic presence and unrelenting impact of a hip-hop legend gone too soon.” —Kirkus Reviews

Rob Kenner is one of the most prolific and influential voices in hip hop publishing. A founding editor of Vibe, he joined the start-up team of Quincy Jones’ groundbreaking hip hop monthly in 1992. During a nineteen-year run at Vibe he edited and wrote cover and feature stories on iconic cultural figures ranging from Tupac Shakur to Barack Obama as well as writing the acclaimed column “Boomshots.” His writing has appeared in Poetry magazine, the New York Times, and Billboard, among others. He has also produced and directed documentary shorts on the likes of De La Soul, Nas, and Post Malone. As an editor at Vibe Books, he worked on the New York Times bestseller Tupac Shakur and contributed to The Vibe History of Hip Hop. He went on to co-author VX: 10 Years of Vibe Photography and produced the book Unbelievable, a biography of The Notorious B.I.G. by Cheo Hodari Coker Jr., which was optioned for the motion picture Notorious.