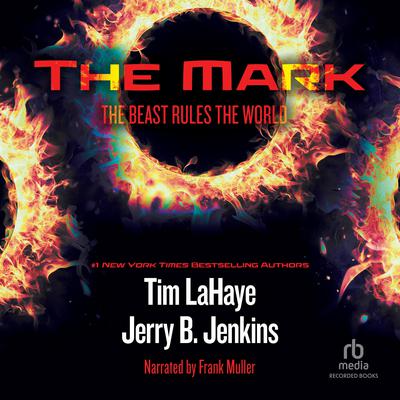 The Mark: The Beast Rules the World

By Tim LaHaye  and Jerry B. Jenkins
Read by Frank Muller

The Left Behind Series: Book 8

The Left Behind series has topped best-seller lists across the country, been the subject of special features in national media, and captured the attention of Hollywood producers. With sales in the tens of millions, the Left Behind books are the biggest selling inspirational series of all time. Those who were left behind after the Rapture must now make a crucial decision. Each person must choose whether to receive the mark of the beast, or die. Never has faith in God been more important for the group of believers called the Tribulation Force, who now face danger on all sides. Valiantly, they continue to urge new followers to accept Christ's love. Noted scriptural authority Tim LaHaye provides outlines for the vivid Biblical prophecies in The Mark and the other books in the series. Best-selling author Jerry B. Jenkins creates the dramatic stories for each fast-paced apocalyptic thriller. With Audie Award-winning narrator Frank Muller's powerful performance, The Mark takes on additional dramatic force.

Dr. Jerry B. Jenkins, former vice president for publishing and currently chairman of the board of trustees for the Moody Bible Institute of Chicago, is the author of nearly two hundred books, including the bestselling Left Behind series. Twenty of his books have reached the New York Times bestsellers list, seven debuting at number one. Formerly editor of Moody magazine, Jenkins is now a contributing editor to Writer’s Digest, and his writing has appeared in Time, Reader’s Digest, Parade, Guideposts, and dozens of Christian periodicals. His nonfiction includes as-told-to biographies of Hank Aaron, Orel Hershiser, Walter Payton, Nolan Ryan, and many others. Jenkins owns the Christian Writers Guild, which mentors and trains writers.