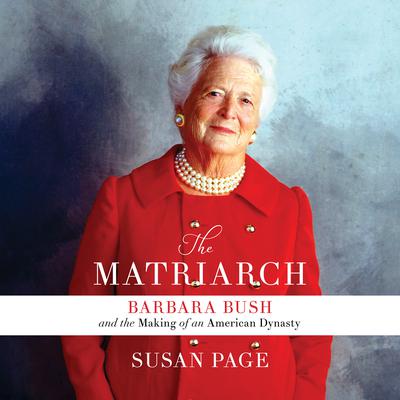 The Matriarch: Barbara Bush and the Making of an American Dynasty

A #1 Amazon.com bestseller in Women in History

A USA Today Pick of Best Books for Mother's Day

A vivid, immersive biography of former First Lady and Bush clan matriarch Barbara Bush, one of the most storied women in American political history.

Barbara Pierce Bush — political powerhouse, Bush family matriarch, former First Lady, and celebrated public servant — has not been the focus of a robust, mainstream biography for over a decade.

In The Matriarch, her story is revived and told in full: from growing up in Rye, New York to becoming America’s First Lady, every tragedy and triumph is rivetingly told. An institution in and of herself, Barbara Bush’s role in American history cannot be understated. Beginning while Second Lady and through her time as First Lady, she invested herself deeply in expanding literacy programs in America, launched efforts to combat homelessness, and eventually became the first woman since Eleanor Roosevelt to speak at her party’s national convention in 1988. While her own political beliefs sometimes differed from her husband’s, Barbara Bush nevertheless became an astute political campaign strategist, helping him to gain the nomination and win the election.

Barbara Bush’s accomplishments, struggles, and contributions are many. Now, Susan Page brings them all into one place in The Matriarch, a book certain to cement Barbara Bush as one of the most unique and influential figures in American history.

“An insightful and engaging portrait of a remarkable American.” —Jon Meacham, Pulitzer Prize winner and #1 New York Times bestselling author
“The Matriarch is the rare biography of a public figure that’s not only beautifully written, but also shockingly revelatory.” —The Atlantic
“In this insightful, touching, personal saga of the happiness and heartaches that shaped Bush into one of this nation’s most formidable first ladies, Page makes a compelling case that behind the trademark white hair, string of pearls and sharp wit was one of the most powerful, overlooked and under-appreciated women of our times.” —USA Today
“Snoopy and insightful.” —New York Times
"[A] highly readable portrait…A welcome contribution to our understanding of the complex role of presidential spouses.” —Washington Post
“Kate Levy scores a triumph with her first audiobook narration, masterfully delivering this exhaustively researched biography of First Lady Barbara Bush. Even listeners with only the most casual interest in Mrs. Bush will find themselves transfixed by complex and fascinating insights that are short on sentiment and long on family dynamics. Levy’s narration is appealing, straightforward, and highly adaptable to the narrative…Winner of the AudioFile Earphones Award.” —AudioFile

Susan Page is the award-winning Washington Bureau chief of USA Today, where she writes about politics and the White House. She has interviewed the past nine presidents and reported from six continents and dozens of foreign countries. She has appeared as an analyst on ABC’s This Week, CBS’ Face the Nation, CNN’s State of the Union, Fox News Sunday, NBC’s Meet the Press, PBS’ NewsHour, NPR’s The Diane Rehm Show, and other TV and radio programs. She lives in Washington, DC.