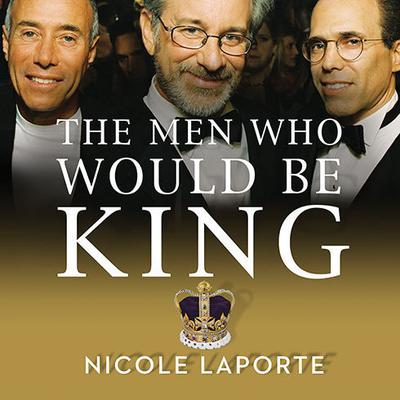 The Men Who Would Be King: An Almost Epic Tale of Moguls, Movies, and a Company Called DreamWorks

For sixty years, since the birth of United Artists, the studio landscape was unchanged.Then came Hollywood's Circus Maximus—created by director Steven Spielberg, billionaire David Geffen, and Jeffrey Katzenberg, who gave the world The Lion King—an entertainment empire called DreamWorks. Now Nicole LaPorte, who covered the company for Variety, goes behind the hype to reveal for the first time the delicious truth of what happened. Audiences will feel they are part of the creative calamities of moviemaking as LaPorte's fly-on-the-wall detail shows us Hollywood's bizarre rules of business. We see the clashes between the often otherworldly Spielberg's troops and Katzenberg's warriors, the debacles and disasters, but also the Oscar-winning triumphs, including Saving Private Ryan. We watch as the studio burns through billions, its rich owners get richer, and everybody else suffers. We see Geffen seducing investors like Microsoft's Paul Allen, showing his steel against CAA's Michael Ovitz, and staging fireworks during negotiations with Paramount and Disney. Here is Hollywood, up close, glamorous, and gritty.

“LaPorte’s lenghty narrative is the definitive history of the studio, an achievement of dispassionate reporting in the genre of corporate decline-and-fall.” —Los Angeles Times
This rise and fall and clash of the titans account can be a thrilling ride. —The Boston Globe
“Will no doubt seal LaPorte’s status as persona non grata in Hollywood, but readers will love it.” —Booklist
“Narrator Stephen Hoye makes listeners feel like they’re part of the creative calamities of movie-making [in] LaPorte’s fly-on-the-wall reporting..Hoye uses just enough vocal variation to portray the fireworks that characterized the company’s negotiations with Paramount and Disney.” —AudioFile

Nicole LaPorte is the author of Guilty Admissions and The Men Who Would Be King: Movies, Moguls, and a Company Called Dreamworks. She is a Los Angeles based senior writer for Fast Company. She previously was a columnist for the New York Times and a staff writer for Newsweek, the Daily Beast, and Variety. She also wrote the “Rules of Hollywood” column for the Los Angeles Times Magazine.