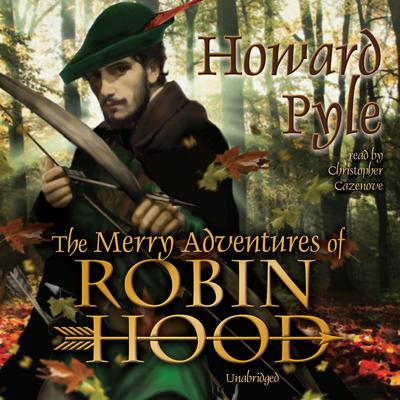 The Merry Adventures of Robin Hood

"You who so plod amid serious things that you feel it a shame to give yourself up even for a few short moments to mirth and joyousness in the land of Fancy; you who think that life hath naught to do with innocent laughter that can harm no one, these pages are not for you."—from the book

Here are the beloved adventures of the mischievous hero Robin Hood and his brave and merry band of outlaws, who forged a chivalrous code to protect the oppressed and despoil the oppressors by stealing from the rich and giving to the poor. Follow along as Robin makes his breathtaking escapes from his archenemy, the Sheriff of Nottingham, while classic characters like Friar Tuck, Will Scarlet, and Little John create one hilarious escapade after another. Pageantry, knights, and beautiful maidens of old abound in the episodes comprising this favorite story.

“Christopher Cazenove invests Pyle’s stories with engaging voices, not just for the clever Robin and the nasty Sheriff of Nottingham, but also for minor characters such as Wat o’ the Crabstaff. Cazenove keeps his voice just rough enough in singing the many ballads that punctuate the story. His narrative delivery has a gentle tone that contrasts well with the rough characters, reminding the listener that Robin Hood’s story is the stuff of legend. There’s lots of fighting, but the emphasis on Robin’s cleverness and his code will make this production a family favorite.” —AudioFile