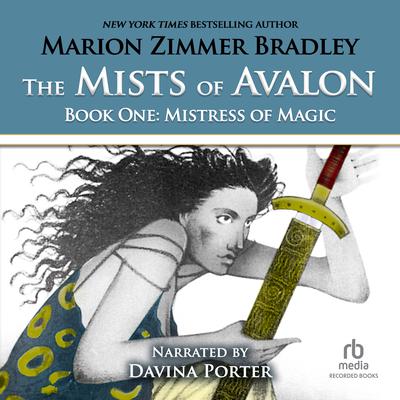 The Mists of Avalon: Mistress of Magic

The Mists of Avalon Series: Book 1

In the tradition of T.H. White's The Once and Future King, the author makes use of the prerequisites of the Arthurian legend: Excalibur, the Holy Grail, Lancelet's illicit love for Gwenhwyfar, the destruction of Camelot, but with a twist--she presents the entire panoramic story from the female point of view. No passive by-standers, these earthy priestesses from Avalon literally breathe life into a musty, oft-told tale. In Book One: Mistress of Magic, the Lady of the Lake--Viviane--brings about the marriage of her younger sister Igraine to Uther Pendragon. Their only child, Arthur, is believed to be the last hope in the long standing war between Saxons and Romans. Meanwhile, Morgaine, Igraine's daughter by her first marriage to Gorlois, has come under the apprenticeship of Viviane at Avalon. In spite of her great love and hope for Morgaine, Viviane is driven by an unrelenting vision. Miserable, but duty-bound, she tricks Morgaine and Arthur into becoming lovers during the night of the ritual fires. Enraged and shamed by what her aunt has done, Morgaine plans to rid herself of the child that has resulted from their union. Book one ends with Arthur's coronation and Morgaine's decision to leave Avalon.

An epic novel of violence … and haunting enchantments. —--Publishers Weekly

Marion Eleanor Zimmer Bradley (1930–1999) received her BA from Hardin Simmons University in Abilene, Texas, and her graduate degree from the University of California–Berkeley. She was a science fiction and fantasy fan since her teens and had written as long as she could remember, but only for school magazines and fanzines until she sold her first professional short story to Vortex Science Fiction. She wrote everything from science fiction to Gothics but is probably best known for her Darkover novels and her Arthurian novel, The Mists of Avalon. In addition to her novels, she edited magazines, both amateur and professional.