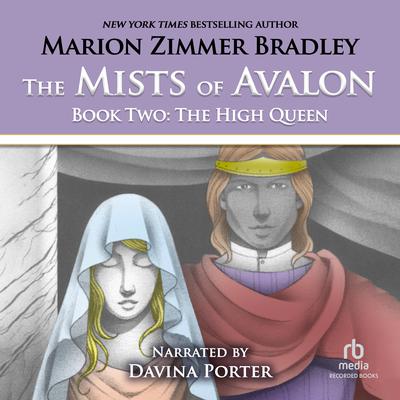 The Mists of Avalon: The High Queen

The Mists of Avalon Series: Book 2

This imaginative return to the Arthurian legend as told from its pagan priestesses continues with Book Two: The High Queen. Morgaine, finally reconciled to the birth of her son, must relinquish him to her aunt Morgause in exchange for the kept secret regarding his parentage. Arthur marries the timid but dutiful Gwenhwyfar, while ongoing wars with the Saxon invaders continue to rage accross the land. Morgaine, tired of worldly concerns, attempts to return to Avalon, but disappears without a trace somewhere near the end of her journey. In a last bid for peace, Arthur compromises his loyalty to Avalon by carrying the Christian banner into battle. Gwenhwyfar's inability to conceive has the kingdom despairing of an heir to the throne, while behind the scenes, her love for Lancelet grows more impassioned and desperate.

A monumental reimagining of the Arthurian legends … reading it is a deeply moving and at times uncanny experience … an impressive achievement. —--The New York Times Book Review

Marion Eleanor Zimmer Bradley (1930–1999) received her BA from Hardin Simmons University in Abilene, Texas, and her graduate degree from the University of California–Berkeley. She was a science fiction and fantasy fan since her teens and had written as long as she could remember, but only for school magazines and fanzines until she sold her first professional short story to Vortex Science Fiction. She wrote everything from science fiction to Gothics but is probably best known for her Darkover novels and her Arthurian novel, The Mists of Avalon. In addition to her novels, she edited magazines, both amateur and professional.