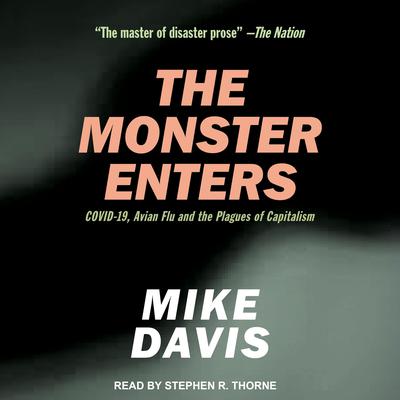 The Monster Enters: COVID-19, AVIAN FLU AND THE PLAGUES OF CAPITALISM

In this substantially expanded edition of his earlier book, The Monster at Our Door, the renowned activist and author Mike Davis looks at the COVID-19 pandemic now sweeping the world. He sets the current crisis in the context of previous viral catastrophes, notably the 1918 influenza disaster that killed at least forty million people in three months and the Avian flu of a decade and a half ago that sounded a tocsin, disastrously ignored by those in power, for today's devastating outbreak.

In language both accessible and authoritative, The Monster Enters surveys the scientific and political roots of today's viral apocalypse. In doing so it exposes the key roles of agribusiness and the fast-food industries, abetted by corrupt governments and a capitalist global system careening out of control, in creating the ecological pre-conditions for a plague that has brought much of human existence to a juddering halt.

Mike Davis (1946-2022) was an author, historian, and political activist. He was known for his exposés of economic, social, environmental ,and political injustice. He wrote several books, including City of Quartz, Ecology of Fear, Late Victorian Holocausts, Planet of Slums, and Magical Urbanism. He was a Getty Scholar, was awarded a MacArthur Fellowship received the Lannan Literary Award for Nonfiction. Late Victorian Holocausts won the World History Association Book Prize.