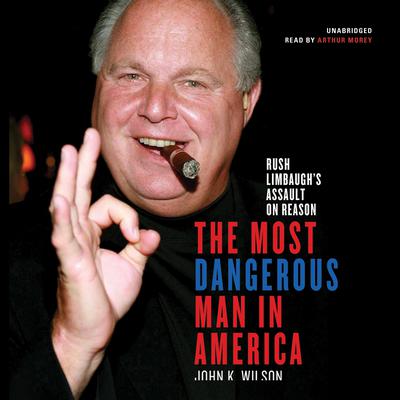 The Most Dangerous Man in America: Rush Limbaugh’s Assault on Reason

This is a searing indictment of Rush Limbaugh’s bankrupt ideology and how he has singlehandedly quashed American political debate.

With almost twenty million listeners on more than six hundred stations, Rush Limbaugh is the leading and most dangerous figure in the conservative movement today. John K. Wilson uses the most effective strategy of all—Rush’s own words—to show how Limbaugh’s flagrant disregard for the truth and penchant for savage personal attacks laced with racist, sexist, and homophobic slurs have held the political arena hostage. In this scrupulously documented dissection of the media giant, the author reveals how Rush’s seductive message of hatred has replaced political debate with paranoia. Limbaugh’s machine has become so powerful that even Republicans dare not question his conclusions, while liberal shows are forced to engage with him and provide a forum for his venomous agenda.

The Most Dangerous Man in America is a rigorous, definitive takedown of the one man who does more than any other to poison the American airwaves.

“No matter what you think you know about Rush Limbaugh, be prepared to discover that he is even more evil and more dangerous than you ever imagined. John Wilson unmasks America’s leading conservative as a shallow thinker, intolerant bigot, and congenital liar. And that’s just for starters.” —Bill Press, host of The Bill Press Show and author of Toxic Talk: How the Radical Right Has Poisoned America’s Airwaves
“Wilson dissects the rise of Limbaugh’s influence on the right wing, his nearly uncontested stranglehold on the Republican Party, and his role in poisoning the discourse of American politics to the detriment of politics for Americans of all political positions. A reasoned, well-documented look at one man’s powerful and dangerous grip on American politics.” —Booklist (starred review)
“Narrator Arthur Morey uses a slow monotone in this definitive takedown of Limbaugh. It covers every detail of Limbaugh’s doctor shopping for pain medicine and uses his own words to show a flagrant disregard for the truth and a penchant for personal attacks laced with racist, sexist, and homophobic slurs. Most revealingly, the author demonstrates how Limbaugh’s baseless proclamations and love of personal attacks have had a chilling effect on both political parties. No matter what you thought about Limbaugh before, you will never feel the same way about him again.” —AudioFile
“Of interest to liberal readers and scholars concerned about Limbaugh’s influence on American society and politics.” —Library Journal

John K. Wilson is the author of five previous books, including Newt Gingrich: Capitol Crimes and Misdemeanors, Barack Obama: This Improbable Quest, and Patriotic Correctness: Academic Freedom and Its Enemies. He is the editor of Illinois Academe, the newspaper of the Illinois conference of the American Association of University Professors. A former student of Barack Obama at the University of Chicago, he is an Illinois native who currently lives in Chicago.