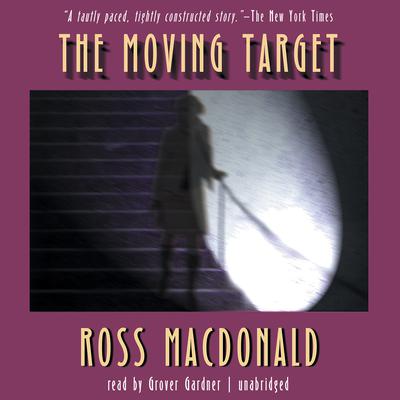 Like many Southern California millionaires, Ralph Sampson keeps odd company. There’s the sun-worshiping holy man whom Sampson once gave his very own mountain, and the fading actress with sidelines in astrology and S&M. Now, one of Sampson’s friends may have arranged his kidnapping.

As private eye Lew Archer follows the clues from the canyon sanctuaries of the megarich to jazz joints where you can get beaten up between sets, The Moving Target blends sex, greed, misdirected love, and family hatred into an explosive crime novel.

“Archer solves crimes with the instincts of a psychologist and the conscience of a priest, and the mid-twentieth century Southern California setting is a wonderful ride in the Wayback Machine.” —Los Angeles Times
“This is hard-boiled detective writing at the top of its form.” —Library Journal
“One of the ‘Big Three’ in American hard-boiled detective fiction, with Chandler and Hammett.” —AudioFile, praise for the author
“Lew Archer was possibly the ultimate father figure and Ross Macdonald is probably still best read as a young man, preferably in a bus station at 1 a.m., with everything you own in a backpack, waiting for a bus to somewhere/anywhere else.” —Kevin Burton Smith, crime fiction editor and critic
“The greatest PI series ever written? Probably.” —Thrilling Detective magazine, praise for the Lew Archer series