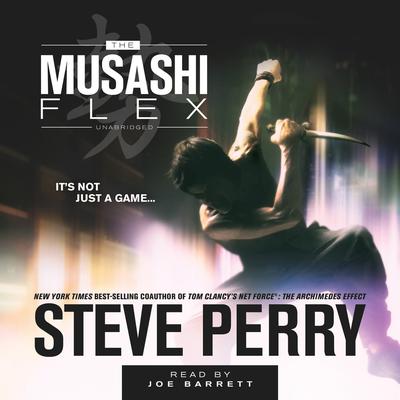 In the early twenty-third century, one of very few ways to rise above your caste is to become a player in the extreme martial arts game known as the Musashi Flex. Now, three people will enter its violent culture.

Lazlo Mourn is ready to hang up his blades when his moves suddenly evolve toward a form of fighting unlike any the galaxy has ever seen. Journalist Cayne Sola is determined to get the big story on the games, and not even the most blood-hungry Flex fighter will stop her. Billionaire Ellis Mtumbo Shaw has everything money can buy except fame on the Flex fields of combat, but an untested drug may put that within his reach.

Their fates will entwine and be decided in the bloody arena of the Flex. And if they survive, their story will become legend.

Steve Perry has sold dozens of stories to magazines and anthologies and has also written a considerable number of novels, animated teleplays, nonfiction articles, reviews, and essays, along with a couple of unproduced movie scripts. He wrote for the television show Batman: The Animated Series and was nominated for an Emmy for Outstanding Writing, and his novel Star Wars: Shadows of the Empire spent ten weeks on the New York Times bestseller list. He also wrote the bestselling novelization of the blockbuster movie Men in Black, and all of his collaborative novels for Tom Clancy’s Net Force series have made the New York Times bestseller list. He is a recipient of the Willamette Writers Lifetime Achievement Award.