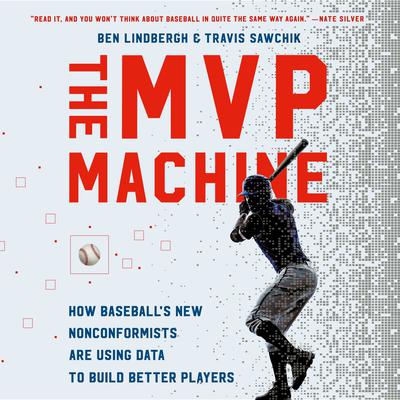 By Ben Lindbergh  and Travis Sawchik
Read by Josh Hurley

Move over, Moneyball -- a cutting-edge look at major league baseball's next revolution: the high-tech quest to build better players.

As bestselling authors Ben Lindbergh and Travis Sawchik reveal in The MVP Machine, the Moneyball era is over. Fifteen years after Michael Lewis brought the Oakland Athletics' groundbreaking team-building strategies to light, every front office takes a data-driven approach to evaluating players, and the league's smarter teams no longer have a huge advantage in valuing past performance.

Instead of out-drafting, out-signing, and out-trading their rivals, baseball's best minds have turned to out-developing opponents, gaining greater edges than ever by perfecting prospects and eking extra runs out of older athletes who were once written off. Lindbergh and Sawchik take us inside the transformation of former fringe hitters into home-run kings, show how washed-up pitchers have emerged as aces, and document how coaching and scouting are being turned upside down. The MVP Machine charts the future of a sport and offers a lesson that goes beyond baseball: Success stems not from focusing on finished products, but from making the most of untapped potential.

Travis Sawchik is a staff writer for FiveThirtyEight and regularly contributes to the Athletic Cleveland. He previously covered the Pirates for the Pittsburgh Tribune-Review. Travis is the author of the New York Times bestseller Big Data Baseball: Math, Miracles, and the End of a 20-Year Losing Streak. Sawchik has won national Associated Press Sports Editor awards, and his work been featured or referenced on ESPN, Grantland, and the MLB Network.