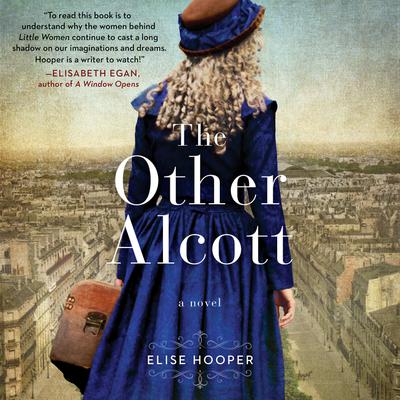 The Other Alcott: A Novel

Elise Hooper’s debut novel conjures the fascinating, untold story of May Alcott—Louisa’s youngest sister and an artist in her own right.

We all know the story of the March sisters, heroines of Louisa May Alcott’s Little Women. But while everyone cheers on Jo March, based on Louisa herself, Amy March is often the least favorite sister. Now, it’s time to learn the truth about the real “Amy”, Louisa’s sister, May.

Stylish, outgoing, creative, May Alcott grows up longing to experience the wide world beyond Concord, Massachusetts. While her sister Louisa crafts stories, May herself is a talented and dedicated artist, taking lessons in Boston, turning down a marriage proposal from a well-off suitor, and facing scorn for entering what is very much a man’s profession.

Life for the Alcott family has never been easy, so when Louisa’s Little Women is published, its success eases the financial burdens they’d faced for so many years. Everyone agrees the novel is charming, but May is struck to the core by the portrayal of selfish, spoiled “Amy March.” Is this what her beloved sister really thinks of her?

So May embarks on a quest to discover her own true identity, as an artist and a woman. From Boston to Rome, London, and Paris, this brave, talented, and determined woman forges an amazing life of her own, making her so much more than merely “The Other Alcott.”

“Campbell’s narration becomes more animated as May matures and finds respect as an excellent still life painter. The art scene of the period, with its painters, models, and students, is fascinating, and Campbell’s enthusiasm is contagious.” —AudioFile
“Elise Hooper is a beautiful, engaging storyteller. The Other Alcott is a delightful and memorable debut.” —Sarah Jio, New York Times bestselling author
“[May’s] adventures illuminate the world of intrepid female artists in the late 1800s…The Other Alcott comes alive in its development of the relationship between Louisa and May.” —New York Times
“A delightful, moving book about the strength of women, the impetus of creativity, and the indelible bond between sisters…This engaging take on the real-life relationship between the Alcott sisters will fascinate and inspire.” —Tara Conklin, New York Times bestselling author
“The Other Alcott will also appeal to readers who have never read Little Women but have an interest in the role of women in history.” —Charleston Gazette-Mail
“A fascinating concept and just the way to kick off your celebration of the 150th anniversary of the publication of Little Women.” —Historical Novel Society
“Hooper infuses her story with heart, giving readers a nice portrait of a woman lost to history and opening a window into the lives of an American literary family.” —RT Book Reviews
“Hooper is especially good at depicting the complicated blend of devotion and jealousy so common among siblings…A lively, entertaining read.” —Kirkus Reviews
“Elise Hooper’s thoroughly modern debut gives a fresh take on one of literature’s most beloved families. To read this book is to understand why the women behind Little Women continue to cast a long shadow on our imaginations and dreams. Hooper is a writer to watch!” —Elisabeth Egan, author of A Window Opens

Elise Hooper, though a New Englander by birth (and at heart), lives with her husband and two young daughters in Seattle, where she teaches history and literature.