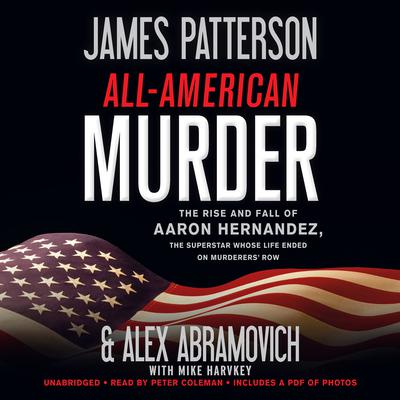 All-American Murder: The Rise and Fall of Aaron Hernandez, the Superstar Whose Life Ended on Murderers' Row

By James Patterson  and Alex Abramovich , with Mike Harvkey
Read by Peter Coleman

A Library Journal bestseller: Books Most Borrowed in April 2018

The instant #1 New York Times bestseller "Ripped from the headlines . . . Combining in-depth, investigative reporting and fresh interviews, the authors effectively tabloid-proof this shocking, celebrity-driven story by lining up the facts and labeling rumors." --USA Today Aaron Hernandez was a college All-American who became the youngest player in the NFL and later reached the Super Bowl. His every move as a tight end with the New England Patriots played out the headlines, yet he led a secret life--one that ended in a maximum-security prison. What drove him to go so wrong, so fast? Between the summers of 2012 and 2013, not long after Hernandez made his first Pro Bowl, he was linked to a series of violent incidents culminating in the death of Odin Lloyd, a semi-pro football player who dated the sister of Hernandez's fiancée, Shayanna Jenkins. All-American Murder is the first book to investigate Aaron Hernandez's first-degree murder conviction and the mystery of his own shocking and untimely death.

“Patterson populates his murder-mystery novels with cold-blooded killers, smart detectives, and hard-charging attorneys, driven by plots entangled in guns, money, and drugs. You’ll find all that in Patterson’s latest. Except this one isn’t fiction…[and] is as ‘ripped from the headlines’ as it gets…Patterson tells the inside scoop on what went wrong…Combining in-depth, investigative reporting and fresh interviews, the authors effectively tabloid-proof this shocking, celebrity-driven story by lining up the facts and labeling rumors…[In] page-turning style, this disturbing true-crime thriller is another fast and captivating Patterson read.” —USA Today

Alex Abramovich has taught at the New School, worked for the New Yorker and Feed, and written for the New York Times, the London Review of Books, and many other publications. He was born in Moscow and lives in Astoria, Queens.