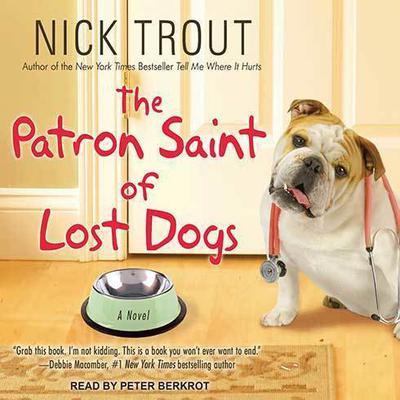 The Patron Saint of Lost Dogs

Dr. Cyrus Mills returns to his hometown after inheriting his father's failing veterinary practice. Cyrus intends to sell the practice and get out of town as fast as he can, but when his first patient—a down-on-her-luck golden retriever named Frieda Fuzzypaws—wags her way through the door, life suddenly gets complicated. With the help of a black Labrador gifted in the art of swallowing underwear, a Persian cat determined to expose her owner's lover as a gold digger, and the allure of a feisty, pretty waitress from the local diner, Cyrus gets caught up in a new community and its endearing residents, both human and animal. Sensing he may have misjudged the past, he begins to realize it's not just his patients that need healing. The Patron Saint of Lost Dogs is a winsome tale of new beginnings, forgiveness, and the joy of finding your way home.

“Author Trout is himself a vet, so his story has a ring of truth. Peter Berkrot tells it with humor and a light touch, making Cyrus’ growth from a self-absorbed whiner to a caring vet believable. Speaking in Cyrus’ voice, Berkrot uses subtle changes in tone, tempo, and pacing to reveal a heart long buried but now free to blossom.” —AudioFile
Trout's charming novel strikes just the right balance between humor and drama. The cast of characters are delightfully entertaining. . . . Highly recommended for anyone who has ever had a beloved pet. —Library Journal Starred Review
“You’re going to love this story. There’s romance, redemption, a dog named Frieda, and a whole lot more. This is a book you won’t ever want to end.” —Debbie Macomber, #1 New York Times bestselling author
“Smartly written…reminiscent of the work of James Herriot.” —Publishers Weekly
“A doggone charming tale…two paws up.” —Kirkus Reviews

Nick Trout graduated from veterinary school at the University of Cambridge, England, in 1989. He is a diplomate of the American and European Colleges of Veterinary Surgeons and a staff surgeon at the Angell Animal Medical Center in Boston. He is the author of the New York Times bestseller Tell Me Where It Hurts and Love Is the Best Medicine.