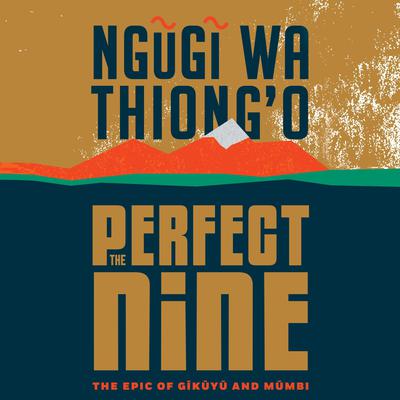 The Perfect Nine: The Epic of Gĩkũyũ and Mũmbi

A dazzling, genre-defying novel in verse from the author Delia Owens says “tackles the absurdities, injustices, and corruption of a continent”

Ngũgĩ wa Thiong’o’s novels and memoirs have received glowing praise from the likes of President Barack Obama, the New Yorker, the New York Times Book Review, The Guardian, and NPR; he has been a finalist for the Man International Booker Prize and is annually tipped to win the Nobel Prize for Literature; and his books have sold tens of thousands of copies around the world.

In his first attempt at the epic form, Ngũgĩ tells the story of the founding of the Gĩkũyũ people of Kenya, from a strongly feminist perspective. A verse narrative, blending folklore, mythology, adventure, and allegory, The Perfect Nine chronicles the efforts the Gĩkũyũ founders make to find partners for their ten beautiful daughters—called “The Perfect Nine” —and the challenges they set for the 99 suitors who seek their hands in marriage. The epic has all the elements of adventure, with suspense, danger, humor, and sacrifice.

Ngũgĩ’s epic is a quest for the beautiful as an ideal of living, as the motive force behind migrations of African peoples. He notes, “The epic came to me one night as a revelation of ideals of quest, courage, perseverance, unity, family; and the sense of the divine, in human struggles with nature and nurture.”

"Onyango uses his rich bass voice to lend a realistic atmosphere to this fantastical tale, which is both contemporary and ancient." —AudioFile Magazine —
In this sinuous retelling by the great Kenyan writer, the founding myth of the Gĩkũyũ people emerges as an epic poem rivalling the Iliad in body count and surpassing it in whimsy.”―The New Yorker —
The Perfect Nine uses a deceptively simple language that lays bare deep truths.”―Financial Times —
A beautiful work of integration that not only refuses distinctions between ‘high art' and traditional storytelling, but supplies that all-too-rare human necessity: the sense that life has meaning.”―The Guardian —
The Perfect Nine is one of the year's great discoveries.”―The Economist —
A vivid, exhilarating tale with a surprisingly modern philosophy that emphasises the importance of tolerance, feminism and respect for the environment.”―Daily Mail —
Ngũgĩ wa Thiong'o's first venture into epic poetry is a triumph of the form, which resounds with the lyrical heartbeat of the Gĩkũyũ people in Kenya as Ngũgĩ chronicles their mythic history.”―World Literature Today —
A beautifully told epic about the fundamentals of humanity.”―The New Statesman —
Unfolding in wry and lyrical verse, The Perfect Nine tells a Homeric odyssey of the creation of the entire Gĩkũyũ people―a creationist myth, an adventure tale, and a family story, wherein the wives do not simply wait at home.”―Literary Hub —
Essential reading and especially vital for our times. . . . Emphasizing fundamental cycles of birth, life, love, and death, this tale is centered on the Gĩkũyũ but connected to all of us and our humanity, a story to be told and retold, as it has been in various forms, for generations.”―Booklist (starred review) —
[The Perfect Nine] departs from the sprawl of his past novels into an engaging if slight lyrical epic. Combining Homeric verse with oral storytelling tropes―choruses, chants, songs―he retells the origin myth of the Gĩkũyũ, Kenya's largest tribe. . . . Thiong'o's fans will appreciate this.”―Publishers Weekly —