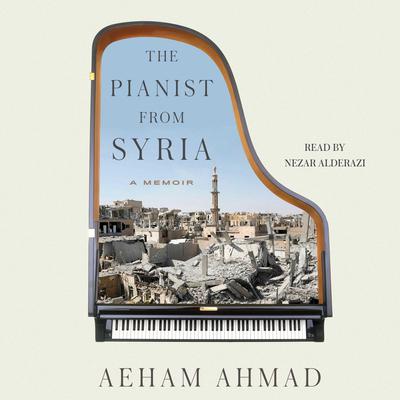 The Pianist from Syria: A Memoir

An astonishing but true account of a pianist’s escape from war-torn Syria to Germany offers a deeply personal perspective on the most devastating refugee crisis of this century.

Aeham Ahmad was born a second-generation refugee—the son of a blind violinist and carpenter who recognized Aeham's talent and taught him how to play piano and love music from an early age.

When his grandparents and father were forced to flee Israel and seek refuge from the Israeli–Palestinian conflict ravaging their home, Aeham’s family built a life in Yarmouk, an unofficial camp to more than 160,000 Palestinian refugees in Damascus. They raised a new generation in Syria while waiting for the conflict to be resolved so they could return to their homeland. Instead, another fight overtook their asylum. Their only haven was in music and in each other.

Forced to leave his family behind, Aeham sought out a safe place for them to call home and build a better life, taking solace in the indestructible bond between fathers and sons to keep moving forward. Heart-wrenching yet ultimately full of hope, and told in a raw and poignant voice, The Pianist from Syria is a gripping portrait of one man’s search for a peaceful life for his family and of a country being torn apart as the world watches in horror.

“It’s not often an audiobook alters your worldview, but this story makes the disaster in Syria vivid and human in a way that headlines never could. Ahmad is a Palestinian growing up in Yarmouk, an “unofficial” Damascus refugee camp where his blind violinist father moves heaven and earth to enable him to become a musician. When, with Yarmouk in rubble and starving under Isis siege, Ahmad begins playing an acoustic piano on the streets and posting the videos on social media, a riveting personal story unexpectedly becomes global. Nezar Alderazi is perfectly cast, his voice warm and trustworthy, his Arabic convincing. He makes you feel that Ahmad is with you, telling you his astonishing story as if he’d never told it to anyone before. Unforgettable.” —AudioFile
“Entrenched in their hometown and determined to stay despite the bombing and snipers, Ahmad used his musical prowess to galvanize his community…Ahmad’s dangerous solo journey to Germany forms the last part of the book…Well-rendered and affecting, this is a fine delineation of the plight of an unwitting protagonist in the Syrian conflagration.” —Kirkus Reviews

Aeham Ahmad was born in Yarmouk, a suburb of Damascus. His father encouraged his musical talent, and at age seven, he began piano lessons at the Arab Institute in Damascus. He later studied music education in Homs and worked as a music teacher. In 2015, he fled to Germany because of the war in Syria. Today. he lives with his family in Wiesbaden and gives concerts all over Europe. In December 2015, Ahmad was awarded the International Beethoven Prize for Human Rights. The Pianist from Syria is his first book.