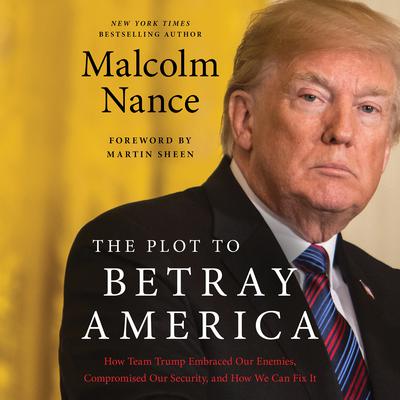 The Plot to Betray America: How Team Trump Embraced Our Enemies, Compromised Our Security, and How We Can Fix It

A #1 Amazon.com bestseller in Fascism

When former FBI Director Robert Mueller III was assigned to the Special Counsel investigation looking into the possibility of Russian interference in the 2016 US election, many Americans felt relieved. But when the report was delivered in April 2019, it was clear that the case was far from closed-and pinning Trump down on conspiracy charges was going to be a lot more difficult than it had first seemed.

In The Plot to Betray America, Malcolm Nance, New York Times bestselling author and renowned intelligence expert, reveals exactly how Trump and his inner circle conspired, coordinated, communicated, and eventually strategized to commit the greatest act of treachery in the history of the United States: compromising

the presidential oath of office in exchange for power and personal enrichment.

Seduced by the promises of riches dangled in front of them by Vladimir Putin, the Trump administration eagerly decided to reap the rewards of the plan to put a Kremlin-friendly crony in the Oval Office. And instead of interfering, the Republican Party's faithful William Barr, Paul Manafort, Michael Cohen, Steve Bannon, Rudy Giuliani, Mitch McConnell, Roger Stone, George Papadopoulos, and Jeff Sessions among others did everything they could to facilitate Trump's damage to national security to fill his own pockets. Through in-depth research and interviews with intelligence experts and insiders, Nance charts Trump's deep financial ties to Russia through his family's investments, including those of Donald Trump Jr., Ivanka Trump, and Jared Kushner, and the corrupt behavior of his other double-crossing pro-Moscow associates.

Only by untangling the spider web of personal and financial relationships linking the White House to the Kremlin can we start to free ourselves from the constricting clutches of our foreign adversaries and work to rebuild our fractured nation.

In this geopolitical page-turner, The Plot to Betray America ultimately sketches the tracks and blueprint of the Trump administration's conspiracy against our country-and how we can still fight to defend democracy, protect our national security, and save the Constitution.

“Assembl(es) scores of reliable media reports, congressional hearing,s and the findings of special counsel Robert Mueller’s investigation into a persuasive whodunit narrative.” —Washington Post
“Trump emerges as treasonous, to be sure, as do others in his administration…Right on the money in enumerating Trump’s high crimes and misdemeanors.” —Kirkus Reviews
“Succinctly recapping the many interconnected Trump scandals and instances of irresponsible and dangerous behavior, Nance methodically illuminates established facts and their consequences and offers new revelations and insights in an evidential fashion. The result is sobering, consequential, and urgent.” —Booklist

Malcolm Nance is an Arabic-speaking former naval intelligence counterterrorism and intelligence officer specializing in the Middle East; a combat veteran; an expert in survival, evasion, resistance, and escape expert; a historian, and New York Times bestselling author. He spent thirty-five years participating in field and combat intelligence activity including both covert and clandestine anti-counterterrorism support to national intelligence agencies. He is a member of the board of advisors at the International Spy Museum in Washington, DC; is honored as one of the noteworthy African-Americans in espionage; and is featured in the Academy Award–nominated documentary Dirty Wars. MSNBC has labeled him one the “unsung national security genius of our time.” He is executive director of the Terror Asymmetrics Project on Strategy, Tactics, and Radical Ideologies.