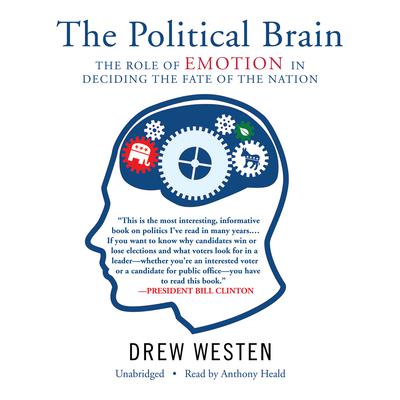 The Political Brain: The Role of Emotion in Deciding the Fate of the Nation

The Political Brain is a groundbreaking investigation into how the mind works, how the brain works, and what this means for why candidates win and lose elections. Scientist and psychologist Drew Westen has explored a theory of the mind that differs substantially from the more dispassionate notions held by most cognitive psychologists, political scientists, and economists—and Democratic campaign strategists. The idea of the mind as a cool calculator that makes decisions by weighing the evidence bears no relation to how the brain actually works. When political candidates assume voters dispassionately make decisions based on the issues, they lose. That's why only one Democrat has been reelected to the presidency since Franklin Roosevelt—and only one Republican has failed in that quest.

Westen turns conventional political analyses on their head, and his discoveries could utterly transform electoral arithmetic. You can't change the structure of the brain, but you can change the way you appeal to it. This book will show you how.

“This is the most interesting, informative book on politics I’ve read in many years…whether you’re an interested voter or a candidate for public office, you have to read this book.” —Bill Clinton
“It would seem the time is ripe for an exploration of how political enthusiasms play out on the neural paths of the brain. Drew Westen, the psychologist and author of The Political Brain, supplie[s]an important study.” —Washington Post Book World
“The Political Brain is the most illuminating book on contemporary American politics I've ever read.” —Boston Globe
“Drew Westen is a must read…We will win the Presidency if our candidate reads and acts on this book.” —Howard Dean
“Anthony Heald’s well-paced narration gives the listener time to digest the book’s complex ideas. His voice is strong and clear, and his diction is superb.” —AudioFile

Drew Westen is a clinical and political psychologist and neuroscientist who has spent years studying personality, psychopathology (“abnormal” psychology), and political decision making. He is the author of The Political Brain and founder of Westen Strategies, a political and corporate consulting firm. He writes frequently for the Washington Post, Politico, CNN.com, Huffington Post, and New Republic and has made appearances on dozens of radio and television shows, including Anderson Cooper 360, Good Morning America, Charlie Rose, The Situation Room with Wolf Blitzer, and Hardball with Chris Matthews.