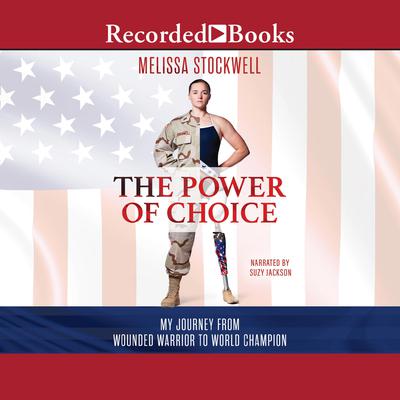 The Power of Choice: My Journey from Wounded Warrior to World Champion

I have had the chance to meet Melissa and hear her amazing story in person. In this book, Melissa shares insight on how she became a warrior and fought back to become the champion she is today. She is a great example of perseverance in the face of what appears to be insurmountable hurdles. Her love of country is strong and carries through her joining the military and representing Team USA in the Paralympic Games. A true champion in many ways.Jackie Joyner Kersee Melissas story of strength and courage is not only incredibly moving, it is a must-read for anyone facing any challenge. Clearly her passion for country and sport drives every one of her accomplishments. From a young gymnast like I was, to representing the United States in Paratriathlon, Melissa inspires us all with her story of overcoming unimaginable adversity and what it truly means to be unstoppable.Shannon Miller Melissa Stockwell has been a restless force of nature from the time she was a little girl speeding around her neighborhood on her bike, to her tumbles and spills as a high-level gymnast and Olympic hopeful, to joining the ROTC in college as an outlet for her patriotism and love of America. After 9/11, she was deployed to Iraq as a commissioned Army officer, where she suffered the injury that would change her life forever. After a long and challenging recovery at Walter Reed Hospital, she exercised her power of choice to channel her energy into competition, winning three Paratriathlon World Championships and medaling at the 2016 Rio Paralympics. Her journey weaves service to her country and the heartache of a painful divorce along with founding a successful nonprofit, launching a career in prosthetics, finding new love, and becoming a mother to two children. Along the way, she meets all the living American presidents and inspires others with disabilitiesthrough a story that is riveting, moving, and an inspiration for anyone who would choose to live their life to the fullest.