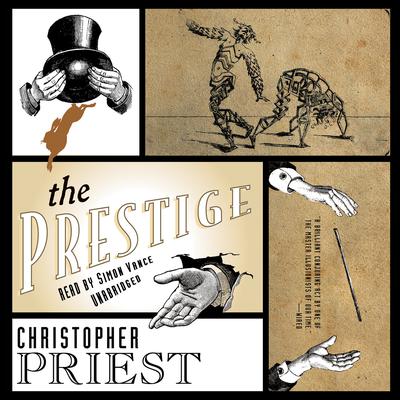 Winner of the 1996 World Fantasy Award for Best Novel

In 1878, two young stage magicians clash in the dark during the course of a fraudulent séance. From this moment on, their lives become webs of deceit and revelation as they vie to outwit and expose each other.

Their rivalry will take them to the peaks of their careers—but with terrible consequences. In the course of pursuing each other’s ruin, they will deploy all the deception their magician’s craft can command, the highest misdirection and the darkest science. Blood will be spilled, but it will not be enough. In the end, their legacy will pass on for generations to descendants who must, for their sanity’s sake, untangle their puzzle.

“A brilliant conjuring act by one of the master illusionists of our time.” —Wired
“Extraordinary—like a dazzling magic act!” —Entertainment Weekly
“A dizzying magic show of a novel, chock-a-block with all the props of Victorian sensation fiction: séances, multiple narrators, a family curse, doubles, a lost notebook, wraiths, and disembodied spirits; a haunted house, awesome mad-doctor machinery, a mausoleum, and ghoulish horrors; a misunderstood scientist, impossible disappearances; the sins of the fathers visited upon their descendants…Imagine Possession rewritten by Barbara Vine, or Robertson Davies at his most smoothly diabolical. A brilliantly constructed entertainment!” —Washington Post
“Hypnotic…The Prestige provides the satisfaction of an ambitious and well-told entertainment.” —San Francisco Chronicle
“Nothing quite prepares you for the sinister complexity and imaginative flair of The Prestige…Magnificently eerie.” —Anthony Quinn, Sunday Times (London)
“Enthrallingly odd…This is a complex tale that must have been extremely difficult to tell in exactly the right sequence, while still maintaining a series of shocks to the very end. Priest has brought it off with great imagination and skill.” —Publishers Weekly
“Priest’s remarkable novel [has] been produced as an audiobook every bit as remarkable…Hearing Vance mellifluously pronounce words like ‘prestidigitator’ as if they were part of his normal speech makes the book worth the time, but there is so much more…Vance expertly portrays these two men as their lives (and their tricks) are slowly revealed.” —AudioFile
“Priest writes crisp, unencumbered prose. And anyone who’s ever thrilled to the arcing electricity in the ‘It’s alive!’ scene in Frankenstein will relish the ‘special effects’ by none other than Nikola Tesla.” —Amazon.com, editorial review
“A taut, twisting, prize-winning story…An unexpectedly compelling fusion of weird science and legerdemain.” —Kirkus Reviews
“Beautifully written…Priest masters the merging of SF and mainstream, and The Prestige is his finest novel to date.” —New Scientist
“It’s difficult to say how long it’s been since I’ve been so enthralled with an audiobook…[Vance’s] performance was stellar. Because of his subtle care, the surprises of the novel were enhanced…The result is an intricate web that is slowly unraveled throughout the book. It’s an audiobook that merits a second listen…An SFFAudio Essential.” —SFFAudio.com
“A marvelously scary entertainment with one of the creepiest final revelations in recent years. Don’t miss the magic show!” —Gahan Wilson, Realms of Fantasy

Christopher Priest has won the World Fantasy Award and the James Tait Black Memorial Prize and in 2001 was awarded the Prix Utopia for lifetime achievement in fantastic literature. He is married to the writer Leigh Kennedy. They live in Hastings, England, with their two children.