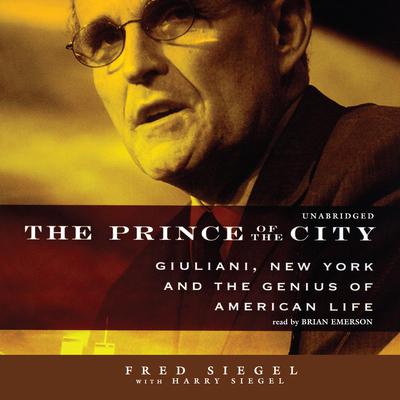 The Prince of the City: Giuliani, New York, and the Genius of American Life

By Fred Siegel with Harry Siegel
Read by Brian Emerson

In the dark days after the 9/11 terrorist attacks, Rudy Giuliani established himself as “America’s mayor.” This first post-9/11 account of his career shows how Giuliani’s successes in New York set a promising example for the rejuvenation of our major cities.

As one who has worked with him as well as studied him, Fred Siegel regards Giuliani as a shrewd tactician and artist of the possible, who could have stepped out of the pages of Machiavelli’s The Prince. A self-promoting, self-absorbed man, the mayor made his enormous ego and tribal ethos serve the city’s well-being, promoting ideals that transcended New York’s ethnic politics and business as usual. The Prince of the City is at once a fascinating character study, a history of New York over the last forty years, and a classic inquiry into the issue of how cities thrive or die.

“Professor Siegel is often extremely insightful and refreshingly evenhanded.” —New York Times
“[An] important and timely book.” —National Review
“The Prince of the City is a remarkable account of the Giuliani years by our best writer on urban affairs. Anyone interested in how the dead hand of ideology came near to crippling our largest city must read this book.” —U.S. News & World Report
“Siegel presents a positive but not uncritical opinion of the Giuliani record, which is of interest in itself but especially if Giuliani runs for president.” —Booklist

Fred Siegel is a professor of history at The Cooper Union for Science and Art in New York City and a senior fellow at the Progressive Policy Institute in Washington. His book, The Future Once Happened Here: New York, DC, LA, and the Fate of America’s Big Cities, was named by Peter Jennings as one of the 100 most important books about the United States in the twentieth century. He lives in Brooklyn with his wife. He was assisted in this book by his son, Harry Siegel.