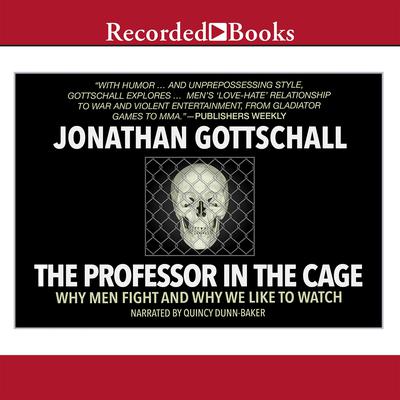 The Professor in the Cage: Why Men Fight and Why We Like to Watch

When a mixed martial arts (MMA) gym moves in across the street from his office, Jonathan Gottschall sees a challenge, and an opportunity. Pushing forty, out of shape, and disenchanted with his job as an adjunct English professor, part of him yearns to cross the street and join up. The other part is terrified. Gottschall eventually works up his nerve, and starts training for a real cage fight. He's fighting not only as a personal test but also to answer questions that have intrigued him for years: Why do men fight? And why do so many seemingly decent people like to watch? Gottschall endures extremes of pain, occasional humiliation, and the incredulity of his wife to take us into the heart of fighting culture-culminating, after almost two years of grueling training, in his own cage fight. Gottschall's unsparing personal journey crystallizes in his epiphany, and ours, that taming male violence through ritualized combat has been a hidden key to the success of the human race. Without the restraining codes of the monkey dance, the world would be a much more chaotic and dangerous place.

A wonderfully honest, entertaining, and insightful book about violence, manhood, courage, and the wisdom that can be gleaned from getting punched in the face.” —Sam Harris, New York Times bestselling author
“When Gottschall finally enters a cage in Johnstown, Pennsyslvania, exhilaration, pain and confusion spatter all over the mat. I won’t give away the outcome, except to say that the thrill of victory and the agony of defeat both make cameos.” —Washington Post
“With humor, literary allusions, and a casual, unprepossessing style, Gottschall explores such related subjects as duels, bullying, English football, men’s ‘love-hate’ relationship to war, and violent entertainment from gladiator games to MMA.” —Publishers Weekly (starred review)
“A fascinating listen. The book is amply enhanced by Quincy Dunn-Baker’s narration. His strong, deep voice captures the personal, professional, and philosophical challenges that Gottschall considers as he recounts his physical training and research. Dunn-Baker provides a great voice for Gottschall.” —AudioFile
“With scientific acumen and literary panache, Gottschall immerses himself, and us, in an ancient part of the male psyche. Among the many treats in this book are the history of recreational fighting, a limpid explanation of sexual selection, and a sympathetic portrayal of working-class men that’s worthy of a great novelist.” —Steven Pinker, Johnstone Professor of Psychology, Harvard University; and author of How the Mind Works

Jonathan Gottschall is a distinguished research fellow in the English department at Washington & Jefferson College. His research has been covered in the New York Times Magazine, the New York Times, Scientific American, the New Yorker, the Atlantic, the Chronicle of Higher Education, and on NPR. His book The Storytelling Animal was a New York Times Editor’s Choice selection and a finalist for the Los Angeles Times Book Prize.