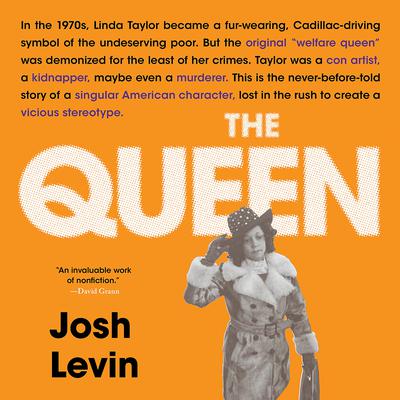 The Queen: The Forgotten Life Behind an American Myth

Winner of the 2019 National Book Critics Circle Award for Biography

Longlisted for the 2020 PEN/Jacqueline Bograd Weld Award for Biography

A Crime Reads Pick of Best Nonfiction Books of 2019

A Chicago Tribune Pick of the Hottest Books of Summer

A Vulture.com Pick of the Month

Critically acclaimed, "reads like a detective story," (Washington Post) "one of the most outlandish true crime capers of the season," (Daily Beast) and the basis for the podcast The Queen, Slate editor Josh Levin's "wild, only-in-America story" (Attica Locke, author of the Edgar Award winning Bluebird, Bluebird) of Linda Taylor, the original "welfare queen"

On the South Side of Chicago in 1974, Linda Taylor reported a phony burglary, concocting a lie about stolen furs and jewelry. The detective who checked it out soon discovered she was a welfare cheat who drove a Cadillac to collect ill-gotten government checks. And that was just the beginning: Taylor, it turned out, was also a kidnapper, and possibly a murderer. A desperately ill teacher, a combat-traumatized Marine, an elderly woman hungry for companionship- after Taylor came into their lives, all three ended up dead under suspicious circumstances. But nobody- not the journalists who touted her story, not the police, and not presidential candidate Ronald Reagan- seemed to care about anything but her welfare thievery.

Growing up in the Jim Crow South, Taylor was made an outcast because of the color of her skin. As she rose to infamy, the press and politicians manipulated her image to demonize poor black women. Part social history, part true-crime investigation, Josh Levin's mesmerizing book, the product of six years of reporting and research, is a fascinating account of American racism, and an exposé of the "welfare queen" myth, one that fueled political debates that reverberate to this day. The Queen tells, for the first time, the fascinating story of what was done to Linda Taylor, what she did to others, and what was done in her name.

"In the finest tradition of investigative reporting, Josh Levin exposes how a story that once shaped the nation's conscience was clouded by racism and lies. As he stunningly reveals, the deeper truth, the messy truth, tells us something much larger about who we are. The Queen is an invaluable work of nonfiction." (David Grann, #1 New York Times bestselling author of Killers of the Flower Moon)

“His real goal is to put a face to Reagan’s bogeywoman, tracking every alias, every scam, every duped husband and every dodged arrest….Part of the fun of Levin’s book is burrowing inside his obsessive quest.” —New York Times Book Review
“Reads like a detective story. Yet it serves up serious and timely questions about the way stereotypes can overpower evidence.” —Washington Post
“January LaVoy narrates this multilayered biography with clarity and compassion.” —Washington Post (audio review)
“Identity theft takes on a new meaning in this mesmerizing biography/social study narrated by the adept January LaVoy…with her modulated, attentive tone…Winner of the AudioFile Earphones Award.” —AudioFile
“A story of grand scale manipulation, both of Taylor’s trail of brazen deceptions but also the role media and politics played in shaping a narrative - making all of us the victims of games of shadows and smoke.” —Los Angeles Times
“The verve and humor of Levin’s writing mirrors the brazenness of the crimes Taylor committed…But there’s a bigger, and grimmer, story here, and Levin gives it its due.” —Minneapolis Star-Tribune
In re-examining the 'welfare queen' myth, Slate's Josh Levin tells a story about racism in America and the oversimplified narratives that still dominate political discourse. —Chicago Tribune
"The Queen is a cross between true-crime story, biography, and political history.” —Shelf Awareness
[Levin's] portrait of [Taylor] is unflinching; so is his portrayal of the demagogues who profited from her story. — Vulture
“Levin takes a holistic approach to Taylor’s story, relaying the details of her early life, her crimes, and her unexpected turn as a national debating point, exposing some uncomfortable truths about the era’s attitudes, so many of which persist today.” —Crime Reads
“A highly recommended, fascinating examination of a prolific con artist. —Library Journal, starred review
"[An] excellent piece of true-crime writing.” —Kirkus Reviews (starred review)
“Levin’s] powerful work of narrative nonfiction…demonstrates how a single distortion can ruin lives.” —Booklist (starred review)
“Levin writes with sympathy. Themes of rejection, racial confusion and possible mental illness create a strong undercurrent beneath this fascinating story.” —BookPage