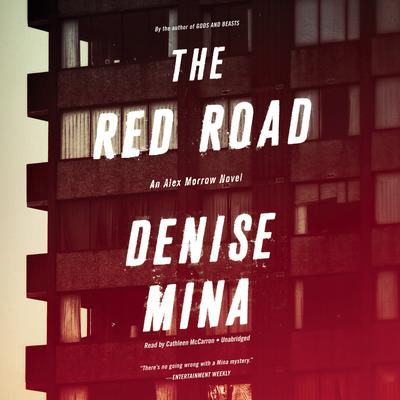 Alex Morrow faces her toughest opponents yet in this brilliant new thriller about criminals, consequences, and convictions.

Police detective Alex Morrow has met plenty of unsavory characters in her line of work, but arms dealer Michael Brown ranks among the most brutal and damaged of the criminals she's known. Morrow is serving as a witness in Brown's trial, where the case hinges on his fingerprints found on the guns he sells.

When the investigation leads to both a privileged Scottish lawyer who's expecting to be assassinated after a money laundering scheme goes bad and a woman who's spying on the people who put her in jail, Morrow has her hands full. And that's before she even gets to her family issues.

The Red Road is a thrilling new novel from a masterful writer, proving once again that "if you don't love Denise Mina, you don't love crime fiction" (Val McDermid).

“Ms. Mina’s narrative is full of suspense, fresh dialogue, and sharp glimpses of all sorts of characters. Most interesting of all to watch is Morrow herself.” —Wall Street Journal
“If anyone can make you root for the murderer, it’s Denise Mina, whose defiantly unsentimental novels are less concerned with personal guilt than with the social evils that create criminals and the predators who nurture them…The Red Road [is] as fierce a story as any Mina has written.” —New York Times Book Review
“The latest offering in the Alex Morrow series takes readers on a journey from past to present through events that shaped the characters…A compelling crime procedural that keeps readers thinking long after the last page is turned.” —RT Book Reviews (4 stars)
“Edgar finalist Mina’s fourth novel featuring Glasgow Detective Inspector Alex Morrow is perhaps her finest yet, a brilliantly crafted tale of corruption, ruined lives, and the far-reaching ripple effects of crime.” —Publishers Weekly (starred review)
“Fourteen years after Princess Diana died in a Paris automobile accident, the date of her death still casts a long shadow over the Strathclyde Police, in the fourth book featuring detective Alex Morrow…In addition to the usual indelible character studies, Mina provides the most compelling plot of Alex’s four cases to date, with a new round of revelations that makes the Glasgow cops the most corrupt since Philip Marlowe looked under all those rocks in Bay City, California.” —Kirkus Reviews (starred review)
“Cathleen McCarron’s wonderful native Scottish accent coupled with her storyteller’s delivery makes this complex mystery come to life. Her idiomatic English is fully accessible to any ear, but listeners will need to pay attention to the time transitions to keep up with the story. Where abrupt transitions can easily be handled in print, they're a bit more difficult to keep on track in audio. McCarron uses a simple narrative voice throughout but with such verve and appropriate passion and inflection that it produces a stunning result. Her power is especially evident in strained situations like carrying on a conversation in an upper story of a demolition site, a scene in which she makes the reader feel the buffeting winds.” —AudioFile