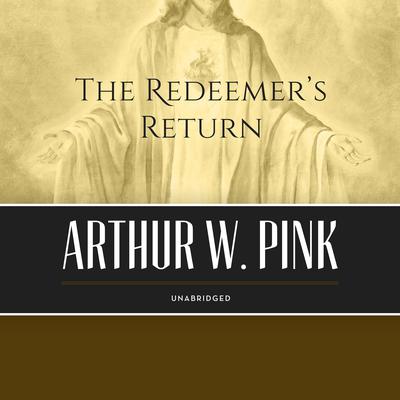 Arthur Walkington Pink was an English Christian evangelist and biblical scholar who was known for his staunchly Calvinist and Puritan-like teachings in an era dominated by opposing theological traditions. Pink was one of the most influential evangelical authors in the second half of the twentieth century. Pink’s beliefs and teachings were largely Calvinist- and Puritan-based. Pink clearly brings us a scriptural analysis of what to expect from the second coming of Christ in a truly thought provoking book.

“The Redeemer’s Return! Here is a theme which in this day is regarded by many well-meaning people as an ideal of visionaries or as the pet hobby of certain cranks. So grievously has the study of Prophecy been ignored, so little place is given in the modern pulpit to the exposition of eschatology, and so generally is the daily reading of the Bible neglected by those in the pew, that it is an easy matter to persuade the average churchgoer that the subject of the Second Coming of Christ is impractical and one that had better be left alone.” —Introduction to book

Arthur Walkington Pink (1886–1952) was one of the most influential evangelical authors in the second half of the twentieth century. He was born in England and converted in his twenties. He served as a pastor in Colorado and other locations until he decided to concentrate on writing and speaking at conferences. The next year he started a monthly magazine, Studies in the Scriptures, which he edited until his death. His writing focused on biblical living and sparked a revival of expository preaching. His works include The Attributes of God, The Patience of God, and The Satisfaction of Christ, among many others.