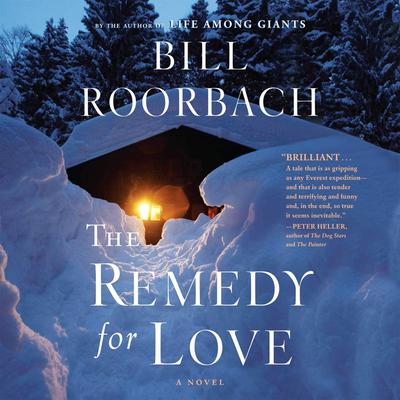 The Remedy for Love

Finalist for the 2014 Kirkus Prize for Fiction

They're calling it the “Storm of the Century,” so Eric stops at the market for provisions on his way home from work. But when the unkempt and seemingly unstable young woman in front of him in line comes up short on cash, charity takes hold of his heart—twenty bucks and a ride home is the least he can do under the circumstances. The trouble is, Danielle doesn't really have a home. She's squatting in a cabin deep in the woods with no electricity, no heat, and nothing but the nearby river to sustain her. Eric tries to walk away, but she's his problem now—what if something happens to her? Would it be on his conscience? She'll need food, water, firewood, and that's just to get her through the storm—there's a whole Maine winter ahead. She clearly doesn't realize the trouble she's in. But neither does Eric; the snow is coming down with historic speed and violence. After Eric gets Danielle set up, he trudges back to the road to retrieve his car, only to find it has been towed ahead of the expected plows—with his cell phone inside. He has no choice but to return to the cabin. As the snow keeps mounting and drifting, they're forced to ride out the storm together, for better and for worse. Intensely moving and frequently funny, The Remedy for Love is a harrowing story about the truths we reveal when there is no time or space for artifice.

“A snowstorm hits a small town in Maine, trapping strangers in a cabin: Danielle, who is homeless, and Eric, a lawyer who swoops in to help her. As temps drop, tensions rise and passions flare.” —Good Housekeeping
“Snowbound in Maine, two strangers struggle to survive—fighting, flirting, baring secrets. Their sexy, snappy dialogue will keep you racing through.” —People magazine
“The Remedy for Love is a page-turner, a love story, and a vivid drama of man (and woman) against the elements…A great read by a wonderful writer who obviously has many tricks up his sleeve.” —Newsday
“[Roorbach] creates believably damaged, oddball characters: a buttoned-up, cuckolded small-town stud, and a bruised, half-starved mystery girl…The story then finds its theatrical groove, with crackling, smart dialogue that made me think Taylor-Burton in Who’s Afraid of Virginia Wolfe? Within the chilled and claustrophobic confines of the cabin, as Danielle’s mysteries unfold and the storm outside rages, you think you know where things are headed, but how Roorbach gets us there is unexpected, sexy, and intense. Edgy and quite moving, the story stuck with me for many days.” —Amazon.com, editorial review
“[A] superbly grown-up love story…Another expertly delivered portrait of the world from Roorbach, that poet of hopeless tangles.” —Kirkus Reviews (starred review)
“Part survival tale and part romance…Roorbach does well in the limited space, keeping the narrative tight without being claustrophobic…There’s more depth to the fierce and mercurial Danielle than meets the eye, which gives [the characters’] interactions spark as the storm rages outside and something even more powerful develops within.” —Booklist
“Narrator Jeffrey Kafer taps into the rhythm of this story… Listeners easily sense the incremental changes in mood as Eric and Danielle move through a full arc of emotions, starting with their mutual distrust and annoyance at being stuck together. Kafer’s tone lightens when the pair finally indulge in the coziness of being hunkered down to wait out the storm. Later his voice sharpens and his pace quickens as the couple face the nightmare of howling winds, growing snowdrifts, and the possibility of death. Kafer excels at the dialogue, skillfully bringing out the characters’ personalities and their changing relationship.” —AudioFile

Bill Roorbach is the author of several books of fiction and nonfiction, including the Flannery O’Connor Prize and O. Henry Prize winner Big Bend, Into Woods, and Temple Stream. The tenth anniversary edition of his craft book, Writing Life Stories, is used in writing programs around the world. His work has been published in Harper’s, Atlantic Monthly, Playboy, the New York Times Magazine, Granta, and dozens of other magazines and journals.